I take photos at the beach!

I need a better cell phone camera. I forgot my good digital camera. If only I would have had a good zoom lens!
Here is a photo of my lovely daughter walking on the sand. Note the lady in the background. She is really pretty normal looking and so it is not that funny. 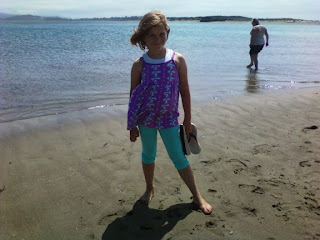 Now check out the photo below... 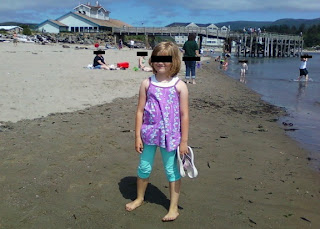 Now check out the closeup of same background scene. This girl looked amazing in a bikini. She had three distinct fat rolls on her belly. Sort of like the Michelin Man! 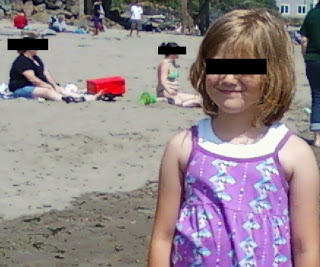 And then I saw this chair at GoodWill that I really want. It was only $4.99! It had a massage and heat feature and it also reclined. It was pretty comfortable as well. But, we did not have the pickup! Oh well, that's me, always a bridesmaid! 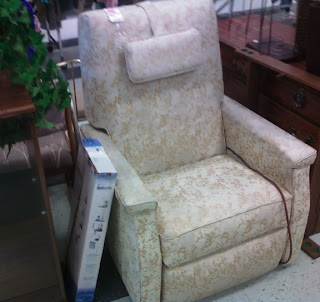 EDIT: It was suggested that perhaps I should not post photos of folks at the beach who do not want their picture taken. While I may find a fascination with the three distinct fat rolls and find it kind of fascinating in much the same way as one would view a train wreck, it was suggested that my innocent curiosity might be misunderstood as perversion as worst and at best some poor girl's feelings would be hurt. I say it is all in the name of science. So I have placed censor marks over the faces. I hope this will prevent any hard feelings. I'm sure the girl was very nice and it was just a bad pose.
Posted by buddeshepherd at 11:16 PM