I think these Floridians on vacation are a bunch of lightweights.
So it is raining and only 72 degrees instead of 85? There is no one of the beach.
Im not on the beach because of my great dedication of blog readers, or because I have had so much rum in my coffee I can no longer stand, or because the daugther and wife went to do laundry and took both room keys.
I
m typing with a bluetooth keyboard andn my GGGalaxy Phone. This is not the best setup you can imagine. I
m not sure if it is the rum or the the tiny  keyboard but things are not working properly.
But I digress...
This is the second day of 2016. My new years resloution was to annoy my daughter 10 percent less. She ssaays this is not working...
New Years day I attempted to resume morning family devotions. But everyone was in too big a hurry to get the beach. The devotion series was on patience.
I burned the bald spot on  top of my head.
I have just been distracted by the image of Bill Cosby on the TV. It reminds me of why I hate liberals so much. Cosby downfall was telling young folk of a protected minority to pull up their pants and get a job. This is the cardinal sin for a liberal.
It was not Cosbys odd kink of having sex with women who were drugged or appeared to be drugged that was the problem. His naughty secret was ignored until it was time to bring him down. That is why he appears so bewildered. He said he put something a little special in my drink and I drank it is really not basis for a lawsuit but works well in the court of public propaganda.
But, I digress....
No one likes long ramblling posts. Full of typos and missspellingss.
Last night we met up with friends at the pier. I cant remember the name of resturaunt. I had blackened shrimp. They were very good.
People were fishing off the pier. You could see the fish swimming under the pier. They were not biting. The kid next to me accidently snagged a little sunfish that apparently ran sideways into his hook. More of a fish traffic accident than good fishing.
It was nice to visit with friends. we were getting a bit bored. People are not as interactive as they used to be. Our friends also read this blog.
They get better looking, more interesting, their children are smarter and better looking, every time I see them.
Several subjects were brought up which I would like to rant about on this blog but this blog has gone on long enough. The beach is calling. Rain, heavy surf, no people, it is like home but without the freezing Ocean water.
Now how do i get bacck in the hotel room.
Perhaps I should just go baack and proofread this poost... 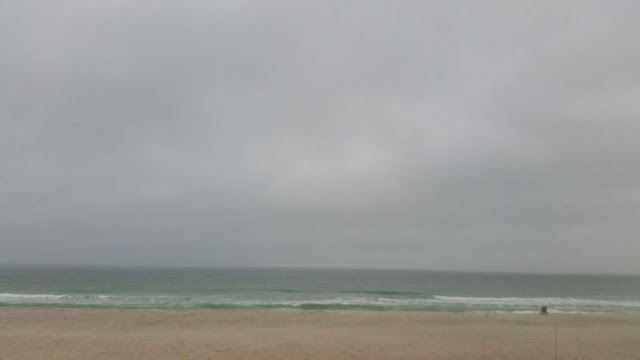 Posted by buddeshepherd at 6:23 AM