Pictures out my window that are not of corn plants

The day starting like this. Sun shining and a couple bearings out on the drill press wheels. Seems like I just replaced all those bearings. I didn't check to see if they were made in China. Most likely the problem.
Last year I had wheel bearings fail. I could only find one USA bearing and one Chinese bearing. Chinese wheel bearing lasted for two days. They were not much difference in price. Chinese one lasted just long enough for the American bearing to arrive from the bearing distributer. 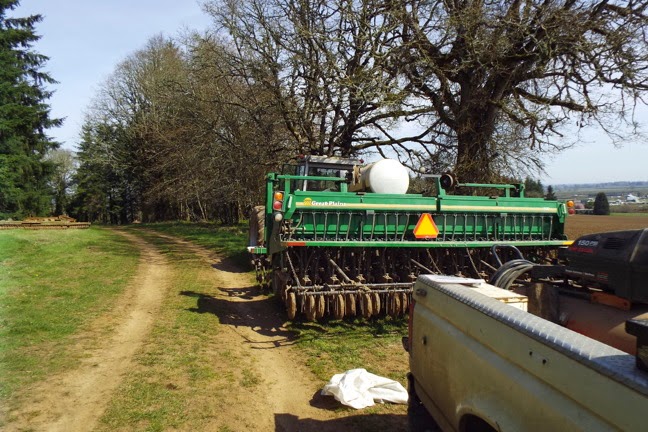 Look at the photo below and see if you can find Mt. Hood. 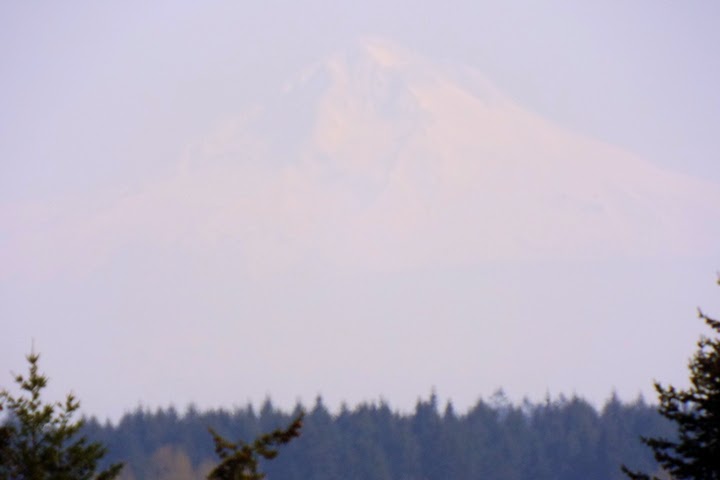 Below is the view from later in the day. It got just a touch on the damp side. I'm no-tilling two rows of peas and one row of fescue into an old clover field. 160lbs of field peas per acre and 5 lbs of fescue.
Farmer was thinking about adding an insecticide to his seed called Lorsban. I was a little worried it might be off-label and even though Lorsban sort of smells like bacon, it makes me sick. And of course I would never do anything I was not licensed to do.
The fescue will grow under the peas and will be harvested next year for the seed. Or at least that is the plan. I have a lot of glowing things in my cab. The screen on the dash is a tablet PC which runs a program called FarmerGPS. I put together my own GPS with this program and an old Raven antenna I bought on ebay. If I would just buy a better antenna I'd get pretty good accuracy. Instead of an antenna I bought new no-till openers as the old ones were worn down an inch or so.
I keep getting upgrades for the program. I could get autosteer if I'd buy the wheel motor or adapt a steering valve. I have lots of projects I never get accomplished. Not sure I really need auto steer. I think I'd rather have an air-ride seat.
I can also watch cartoons on the tablet. I load them into iTunes. For several years I could connect to random internet networks but people have now started using passwords other than "admin" or "123456789," or "password."
Posted by buddeshepherd at 11:27 PM