I attempt to round up a wayward pig

My wife and daughter went to the beach yesterday. I really wanted to go. I love the beach even though it is cold and windy.
My wife bought a Groupon way before we got the chance to go to Florida or were reminded that you should never trust a short guy who over-dresses, is way too enthusiastic, shakes your hand with both hands, and pretends to be best friends with your relatives, with whom you were planning on making jokes about him with. Add fund-raiser-auctioneer to the list and I'm sure you know the type.
But I digress...
I stayed home from the beach to make chicken and pig feed, to get a load of grain, get ready to plant for my neighbors, and because I needed to help my friend get a flock of pigs from Scooter Boy.
Scooter Boy has no idea how to handle animals, he has a short temper, and he has weird friends. The amount of entertainment that this venture would give me almost offsets the intense annoyance that the interaction would undoubtedly provoke.
Things started off at 8:30 a.m. when Scooter Boy showed up with a box of pig feed in his pickup which he needed removed. I was on my way out the door but went back and got another cup of coffee and retired to the bathroom. Some mornings I don't feel like interacting.
Scooter Boy cannot call me because he got a new phone and can't seem to get my phone number into his phone. I daunting task I am sure.
Scooter Boy also likes to create crisis and he does not react well to crisis which I find quite amusing. Usually he deals with the crisis by getting it the hot tub.
We have quite a bit of time to move the pigs but he managed to schedule too many things to do on Saturday so he would have a fake crisis to react badly to and thus have an excuse to get in the hot tub.
He likes hot tubs. (Click here to read a previous pig adventure with Scooter Boy- the Sunday his core body temperature dropped in 65 degree weather and he had to, get in the hot tub)
I called my friend and set up a time to wrestle pigs.
But then came the crisis.
A long time hay customer called to say that he was coming after hay and his daughter was there to help.  His daughter is 19 years old, very pretty, nice, and a Rodeo Queen.
I could have had my brother load them. But really, think about it... A friendly and pretty Rodeo Queen vs a crew of leftists, an Islamic exchange student who is not allowed to touch a pig, Scooter Boy who will possibly have a nervous breakdown, pigs and mud, vs a Rodeo Queen who will laugh at my jokes and give me money...
Strangely enough, Scooter Boy and the pigs did not make the cut.
My friend called me after wresting pigs all morning. He was laughing. He didn't seem hysterical. He said he ended up actually chasing down the piglets (75lbs). They almost got hit by a train, and the Islamic exchange student could not actually touch the pigs so he understandably tended to run when a pig approached.
They did capture the pigs and delivered them to Ruby Hill Farm.
But the entertainment did not end at Scooter Boy's house. My friend, who I shall refer to as Harland Sanders in honor of his chicken ranch, was on his way to pick up feed for our happy family of piggies when he spied the boar wandering in the neighbor's field. "Gus" had escaped and he didn't want to go back to his spacious pen in the oak grove.
He did not complain or run wildly though the fields, he just found a mud puddle and decided to take a nap. 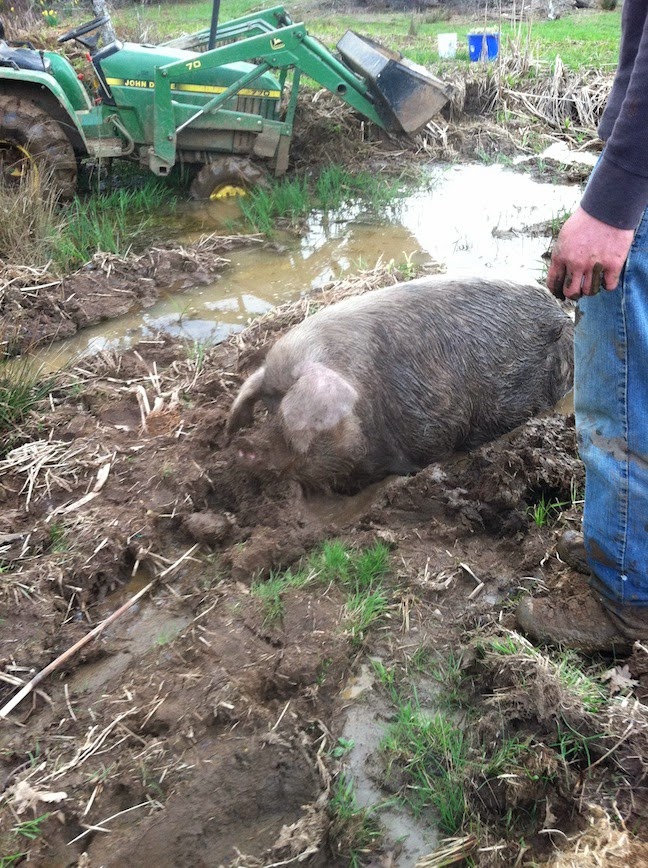 I called Collieguy to find out how to move a pig who did not care about being moved. He laughed. We discussed molasses treats, alfalfa, and a bushel basket over the head, as well as just building a fence around the pig and leaving him there.
Collieguy did offer to bring the collies and help but noted that it would take him 36 hours to get there. He seemed to find the whole situation quite amusing.
I also considered calling MuddyValley but the Rodeo Queen was long gone.
I loaded up all the discussed items along with a pokey stick and my daughter and headed over to help move Gus.
We ended up putting a plastic bucket over his head. He didn't back up as a reaction to having a bucket on his head and he snorted a lot. So we just pulled him by the bucket until the bucket busted. He finally got disgusted with all the poking and prodding and laughter and actually started walking on his own. We herded him, Harlan S. walked behind and Lulu and I were on either side. We actually got him back on the correct side of the electric fence.
I've had quite a bit of experience with electric fences and I immediately suspected a short circuit. I waked the fence and found several.
After I fixed the last short circuit a heard a blood curdling squeal. Ah yes, the fence is now working. We sat around for a while and watch the pigs happily rooting in the oak grove and occasionally backing up against the fence. It was a very satisfying sight.

Posted by buddeshepherd at 8:36 AM