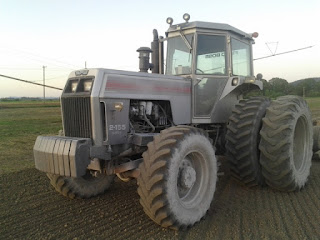 The price of lime is to the point where you sort of think you should brush off the tractor with a broom and work the sweepings back in the ground. 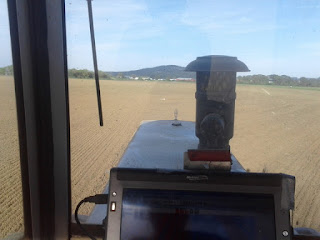 The weather changed from wet to dry in a day. We decided to work the ground instead of no-tilling as our soil tends to dry if you don't break up the surface. It doesn't take much unless you have weeds coming.
We also got to the point where we had to apply lime to the corn ground. So that had to be worked in. We were going to radish but one of the neighbors already had radish, his seed company rep came over with a consolation prize. Spinach! Of course it didn't turn out to be all that simple and we went back to corn.
Today I am going to stop planting and working for myself and pick up hay for my neighbors. This year is the last payment on the stacker and the temptation to become less accommodating becomes much stronger in relation to the stacker being paid off.
I am supposed to pick up bales for three farmers. Around 120 acres in 10-30 acre fields.
Each of these farmers talked to me about making hay. I told them I was planting, chopping silage, and working ground all at the same time, two other people were cutting hay and that I was taking off this weekend.
Of course they all cut.
I didn't cut hay because I knew they would act like they cared, but they would do exactly what they wanted to do.
Some years ago, before I recognized the true nature of the farmer, I would have stayed up all night stacking for them.
It is kind of funny that these people sold their stackers because 1. They had to own the most expensive stackers made, 2. They got tired of stacking for other people, 3. They know large scale production of small bales is on the way out.
I called about a better stacker that was for sale locally. The guy laughed at me and said, "yeah, they are too cheap to buy their own so they want you to do the pain in the arse work for them."
I will feel so much better once I get started because everyone will tell me how they want to give me work so I can make money. It is for my own good.
Posted by buddeshepherd at 6:50 AM