Today it is raining again.
We have 20 acres of corn left to plant.
This is for the neighbor who has a dairy.
The field is a bit of a problem. It had been in grass for years. He does not have a huge amount of water for irrigation. The field needs to be smooth to go back into grass. He does not want to spend a lot of money.
We are trying to decide just what to do with it.
I think it would no-till, and we could probably do it today, but if it failed because of not getting the water on it soon enough, or at the right time, the dairy guy would be somewhat upset with us for planting it no-till.
We could strip-till it and plant it. That would be fast and would be fairly successful. We have glyphosate resistant corn so weed control would not be a problem.
I'd like to get the edges of the field smooth for a road to get the trucks in and out.
I've been thinking about just doing conventional tillage.
Disking it two directions with the cover-crop disk and plowing.
This would mean another three or four trips across the field but with this sort of cloudy weather I don't think we would loose the moisture.
I am thinking about no-till as Ed Winkle has been sending me an email discussion of his love of no-till and also because I applied for a job selling no-till attachments which required me to profess my love and devotion to no-till.
I think I will not get a call-back on the job. Mostly because my cover letter was, "look, I've been a farmer for 30 years, I can do anything you want with five minutes of study, I probably won't do it that well but I'll get it done..."
I don't think that will get you a job in a place where everything is clean and people wear short-pants to work.
But, I digress.
We no-tilled Saturday.
As I related in my last post, we have heavy clay river bottom soil. When it dries it cracks and it looses moisture really fast. There is low organic matter because any loose straw floats down river.
When I saw the weather forecast for a dry month of May I started working any bare ground as soon as it dried out. All it takes is a couple passes of light tillage to break up the surface of the bare dirt.
The dry weather was hard on the strips of annual ryegrass which had sprouted late in the fall. I the plants are not taller than the water they don't do well under water. Plus, this is a duck and goose hunting area and while the geese do provide slug control, they also mow off the annual like a lawn.
We applied glyphosate to the ryegrass and it is dead. It is about 4 to 8 inches in height and brown.
Most of the corn ground was worked this year. We disked it early and harrowed it to conserve the moisture. To plant it we spread on preplant fertilizer and worked it in. There was very little compaction and so we just planted it. Usually, we strip-till but this also make the field really rough.
When we got to the wetter ground and the dead annual ground I went after the strip-tiller.
But, we do have a Dickey-John compaction meter and we have been using it.
So, I tired the compaction meter. 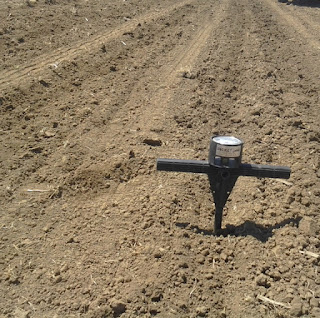 I have never leaned on the compaction meter and had it bottom out before. Either I've gained weight or we have no compaction. I dug down a little ways to see if I was measuring the compaction of mud. It was a little damp but you could not make a ball of dirt with your fist. It still crumbled so I parked the strip-tiller and my brother no-tilled the rest of the field.
We shall see.
I went off and planted Teff.
Two rows of Teff and one row of fescue. Now that could be a spectacular failure...
Posted by buddeshepherd at 7:57 AM