A Vacation For Mother's Day

We spent the weekend at a resort! 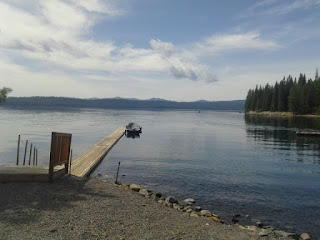 Well, it was not an exactly new resort. There was not a sauna nor were there tennis courts.
An old hippie dude did play his guitar in the morning.
We saw not-very-drunk boaters get arrested.
We rode bicycles. 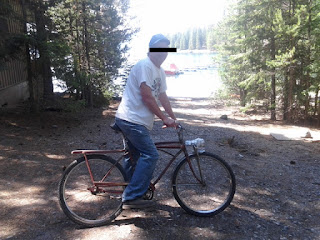 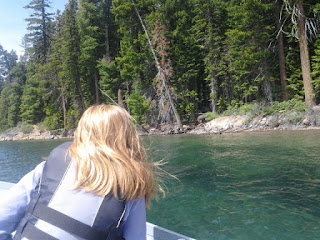 I had never driven a boat before in my life.
We had a nice time.
We went to Crescent Lake Resort it is one of the oldest resorts in Oregon, or at least I think so after reading a sign at the adjacent national park.
It is an interesting place to visit.
The resort seems to attract an interesting demographic. Mostly repeat customers who come for the fishing or snowmobiling in the winter. The people we met were  mostly blue collar folks and foreigners. There were several families with limited English who were from either Germany or Central Europe. I wanted to ask how they heard of the resort but they were not especially eager to interact. I naturally assumed they were Russian Mobsters.
The resort has been purchased by a much larger resort. The people who run the Hoodoo ski resort.
They have been "restoring it." People at the lodge said the resort was getting pretty run down under previous ownership.
I would like to have seen it in the "run-down" condition.
I wonder if they gave discounts if you were there during last year's "hostage situation." Bet that was a circus.
We went to the resort because my wife found a "Groupon" for the resort. Several other people did the same thing. They reminded us to take advantage of our free boat rental.
The boat rental thing kind of confused the combination waitress, hostess, concierge, receptionist, boat rental person, bartender, and who knows what else person. I think she was a bit over worked.
The Groupon was not for the best cabins.
The staff were quite overworked and somewhat jaded by tourists but friendly and nice once it was established that we were not going to annoy them.
We waited an hour and a half for our prime rib dinner even though we had reservations.
But we did not care. We were on vacation. We sat outside and watched the lake. The wife and daughter played a card game. I swatted mosquitos.
We drank lots of coffee, they didn't charge us for the coffee because of the wait.
Sunday we took a boat ride across the lake. Once I figured out how to run a boat it got a bit boring as it was a very small boat motor. There are a lot of trees around the lake. After a while they all look pretty much the same.
I had previously discovered that my fishing license was expired and since the ratio of Sheriff officers to boaters on Saturday was one officer to five boaters I decided to forego the fishing.
On the way back we discovered the Sportsman's Cafe in Oakridge was closed. I think this was not a recent event. The Sportsman's Cafe was straight out of the 1950's and had decent food the last time I was there. Twenty years ago... 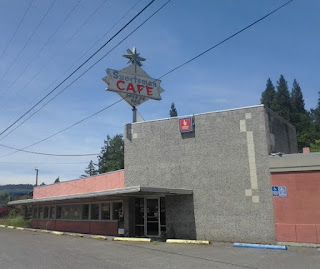 We went to the A&W instead.
We had a good trip. Now I have to go back to work.
Posted by buddeshepherd at 7:00 AM