I was not a big fan of White tractors back when it mattered. I was mad at the company for discontinuing the Minneapolis-Moline line and it took the desperation of not having a tractor to get me to switch from Moline to White.
In fact, I came very close to buying a Case/IH 7140 instead of a 2-155 White.
After owning the 2-155 for a number of years I've changed my mind. Brands that appeared to have more features and seemed like better tractors have proved to be incredibly expensive to own in the long term.
New tractors are overly complicated and too hard for a bottom feeder sort of farmer to repair. My 2-155 and 2-135 are a little hard on fuel usage but are easy to work on and have a 3-spd power shit and PTO that you can remove without having a degree in tractor mechanics and a full featured shop.
And it doesn't take $35,000 to overhaul the powershift.
It took me an afternoon to pull the PTO and three hours to put it back in. Not including the trip to get the book which I forgot to bring with me the first time.
Overhauling the PTO was delegated to my brother. I've worked on them before and they are not terribly difficult.
To pull the PTO you first drain the hydraulic oil. Have six open top five gallon buckets and a helper. The oil comes out pretty fast. Also, remember to take all the buckets out from underneath the tractor before moving it after finishing the job. Five gallons makes a big mess on the shop floor.
Remove the oil lines to the PTO.
I then pulled two bolts out of the cover and replaced them with longer bolts that had the heads removed.  I also put a piece of 1/4" flat bar on top of the hitch bracket. This way you can pull the PTO straight back.
You also have to remove the bolts that hold the three point arm guides as the bolt head will keep you from pulling the PTO straight back.
I removed the rest of the bolts, slid the PTO straight back and then hooked a chain through the top link hole on the PTO housing.
Removal is the reverse.
I used my guides and the 1/4" plate and you can just slide the PTO in.
There is a short PTO shaft that is kind of a Pain to align. It is spring loaded so you have to be careful to to lose anything.
I also changed the Transmission oil filter. When I refilled the transmission I also filled the transmission oil filter. The hydraulics didn't even howl when I started the tractor up.
If you hold the brake pedal down slightly it will circulated the hydraulic oil and is a good way to get the air out of the lines. Also, rails and lower the three-point arms several times.
After getting it all done I discovered hydraulic oil bubbling out of the top of the remote valve body. I have three remotes which makes the repair of this assembly a pain in the bottom.
A project for another day.
And now I am going to go plant something.
Have a nice day. 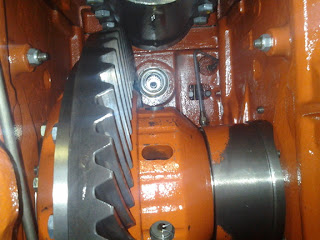 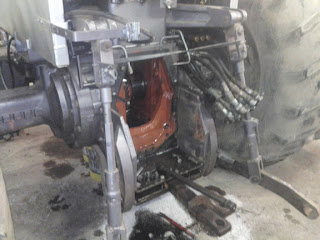 Posted by buddeshepherd at 7:14 AM