Do you see a problem with this picture? Follow the arrow! Yes, that is a 1984 White 2-135, series three, pulling a Hesston 1340 diskmower and both stuck to the axles in a grass field! 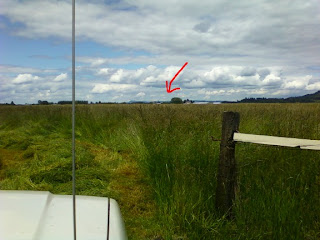 So, Eddie (my sometimes helper who wants to be a farmer some day) went to check on the mowing. Half way there I got a call from my regular helper (shown below) who told me he was stuck. 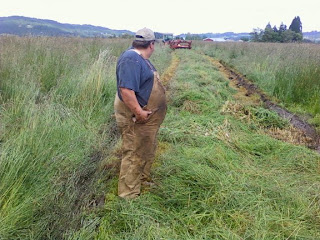 Should he have walked the field, well looking back, I would say yes. The clever folks who farm big in our area like to plow in circles. This is fine for a few years. However, if you always plow the same way, eventually the outside of the field becomes higher than the inside and no longer drains properly. So, the outside round was ok, but splitting the field in half turn out to be a problem. Plus, he managed to hit the big wet spot pretty much dead on. We went after the 2-155 which has FWA and I pulled him right out. Right out the gate, and we went home...

The lady at the house was pretty bizarre! She came out and started swearing at us when we first arrived. She asked us if we were going to be doing this all day, and I said, "it doesn't look like it!" Then suddenly it was F-bomb this and f-bomb that. The dairy fellow didn't call her and tell here people would be driving through her (rented) yard, f-bomb and yet another f-bomb. We just kept walking as she, in a display of fat-girl bravado pulled out her cell phone and said she was going to call the (f-bomb) dairy.
Why is it that fat chicks of a certain ilk always whip out the cell phone. You see them on COPS and then the cops arrive and run a background check and haul them off to jail. Or they call in that their boyfriend has got a gun and then they go hysterical when the cops shoot their boyfriend-who doesn't have a gun but is on drugs or is a re-tard, or has a seizure which makes the cops feel threatened and so they blow him away. (NOTE: This is what happens in the Portland area, you might have cops with actually training where you live.)
Of course if she was not fat and perhaps more so if she was hot, (that is an awkward sentence structure) and she was dropping the f-bomb, we would have probably stopped to watch, but I suppose that would not have been a good thing either...
But, I digress.
When we got the tractor out and were coiling up the cables she came out and wanted to make conversation. She was all smiles and happy-cheerful-whatever. We did not talk to her.
Hint to those who get irate easily, dropping F-bombs on people who are just doing their job is not a way to gain any sort of friendship or co-operation. If you want something or you are upset with them driving through their rented yard it you should try asking nicely. Perhaps offer them a cold Pepsi in summer and a cup of coffee in winter, this is optional. Mostly, just try saying "please" and "thank you."
Posted by buddeshepherd at 12:30 AM