I heard the word Pedantic in a Country Western Song!

I had to stop and come in the house and research this issue. When do you ever hear the word Pedantic used in a song?! Of course I lost the scrap of paper where I wrote down the name of the band and the name of the song and I do need to be working so this will be quick.
I think the band is John Doe and the Sadies and the song is "Drugstore"
I was listening to Soma FM, Tunes for Saddle-Weary Drunkards, on iTunes on the POS but at one time very expensive GoBook ix300 which I sometimes use for FarmerGPS. It would be an ok computer but Windows is the most horrible program in the world so it never connects properly. If only it had the Commodore OS... You want to open a program so you tap on the icon. You get the stupid salt-shaker, you wait, nothing, you tap again, same thing, then you tap 5,000 times really fast, then at last it opens-5,000 windows, then you open the tractor door and throw it as hard and as far as you can, then you pick a fence post and line the little gun sight on the radiator of the White up with the fence post and drive the old fashioned way... DO NOT GO BACK AND PICK UP THE COMPUTER! It will only lead to more anger management problems...
But, I digress.
I think John Doe and the Sadies are some sort of "New Country," progressive BS. Possibly the definition of pretentious, well I guess Sting and U-2 have that covered.
It is pretty sad that the only country music I can stand to listen to is either 50 years old or some weird off the wall and kind of offensive stuff on internet radio.
I don't even know what he song was about, I just heard the word pedantic as I was trying to remove a pin from the corn planter drive shaft.
So far I used, a torch, die grinder, punch, torch, punch, torch, larger hammer, bandaid (for me), cup of coffee (had to take a break as I started to swear and I remembered the Gorges Grouse Post on profanity), torch again, my new $20 battery powerdrill that I bought at a garage sale and it works perfectly), torch, hammer, punch, drill, and then I heard "pedantic" and took a break!
This is my radio-it is hooked to a pair of Bose self powered speakers under the bench. I acquired them somewhere and soldered RCA connectors on the cord as the mini plug failed and they work very well. 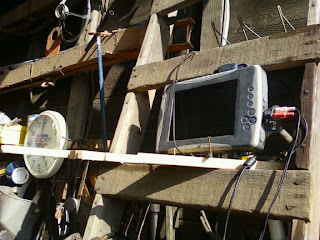 Note the time on the clock... 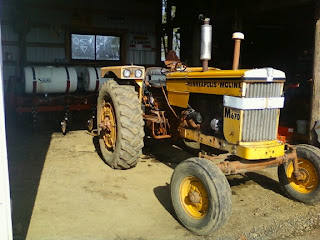 What I am supposed to be working on...
Posted by buddeshepherd at 9:59 AM