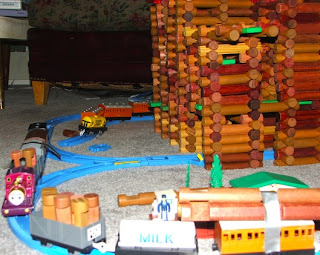 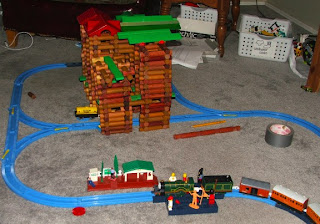 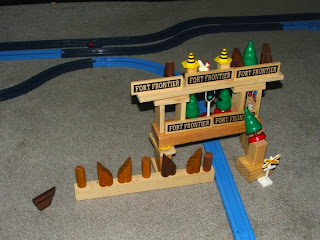 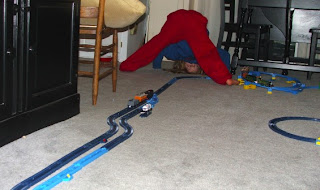 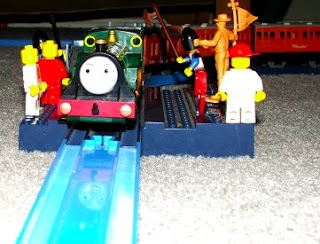 S. decided she wanted to sell her extensive Tomy rail system and buy a remote control monster truck. So I thought we would play with it one last time. I tend to get a bit carried away with my toy collections. This all started with a Thomas the Tank Engine set which I found at GoodWill for $10. Then there was another missmatched set at GoodWill for $5. Then there were some ebay purchases of which some were good and some were bad. We only paid retail for one expansion set. So in the process we ended up with pretty extensive railway system.
S. was sick and we didn't go to church. I refused to get out of bed until S. practically dragged me out. She kept coming in to check on me to see if I was feeling any better.
She had the Lincoln Log hotel already built. It is a very substantial building I might add. I started setting up the train. I started out just seeing how far the track would go and just having a simple circle at each end to get the train back. Then construction started on what S. dubbed a "rest area" not sure exactly what it is as passengers have not been allowed off the trains. This has created a bit of a back log of lego people at the hotel train station.  Construction projects down the train line require all materials to be ordered and shipped by rail. Most of these projects in the past were done with legos but Lincoln Logs were the order of the day. This proved to be a challenge but after some experimentation it was found that large logs could be taped to box cars with duct tape. Of course extra track had to be laid to accommodate additional  rail traffic. More switches and sidings and so the project grew. Some problems with ingoing and outgoing train crashes when the mainline needed to be shared. It is kind of amazing how much you have to think ahead with three battery operated trains and a maze of switches. Anyway we had a good time. Here are some photos not involving dirt. Probably should enjoy our collectable toys while we can as wife's school has to come up with $70,000 in cuts. She is the art teacher. Wonder how long she will have her job, she supplies us with health insurance.
And the morons that got us into this whole crisis just keep spending money we don't have. Insanity!
Posted by buddeshepherd at 9:37 PM