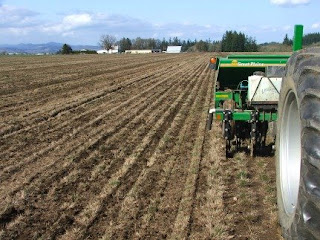 I’ve been working in the mud again. I planted for two people last week. First I finished up the field I had been working on before the rain. It is in the Perrydale area. Really pretty country. (see photos in previous post) It is surrounded by low hills with a view of the coast range to the west. There was still snow on the lower elevations when I was planting. Again it was pretty damp conditions. I was planting Montezuma oats at around an inch deep. Ten gallons of 10-34 fertilizer per acre as a starter. Drill was cutting a groove but mostly filling it in. Some of the bare dirt was crumbling well. The first big field went well. That was the field I was working on in pervious posts.
The next little field was the problem. This one was around 16 acres and was down the road from where I was loading the drill. So I loaded up completely with seed and fertilizer. That was a mistake. I didn’t make it all the way around the field before I spun out. That was partially my fault as I didn’t get the weight transferred off the front coulters back to the press wheels before the drill gauge and transport wheels started sinking. I stopped right away and didn’t let tractor spin. Farmer bought his 2-wd 1086 (with duals) and we found enough log chain to get us onto dry ground. I came right out but did leave some bad ruts.
I was pretty nervous the rest of the way around the field. I quit at dark and came back the next morning when the ground was frozen.
From there I moved five miles to a red clay hillside. It was completely dry. Half the field was really mellow and half was packed hard dirt. I couldn’t separate the halves so it was a challenge to maintain depth.
Also ran into a problem with the seed. I had to switch to treated cayuse oats so I had to re-adjust the drill. Then as I went into the pallet of oats I noticed they felt damp. This really affected the flow rate through the drill. I was trying to get at least 120lbs per acre. The first ten acres are planted at 90, then there is some that is 140, and finally I got it right. It all averaged out correctly. It would seem that with over a million seeds per acre it should work out.
Next I moved back to Amity area. Farmer wanted me to plant wheat. We had around 2 inches of rain in the week between so the ground is pretty wet.
He asked me to plant the wheat above an inch deep. Hopefully 1/2” into the ground with 1/2” of loose dirt over the top. That all sounds easier than it was to actually accomplish.
I almost told him I would not plant the field but after I looked at it he talked me into doing it. When I dug up a little dirt and tried to make a mudball I could almost do it but not quite. The mudball would aways fall apart in the end. Now I know that is not real scientific but it gives you an idea. 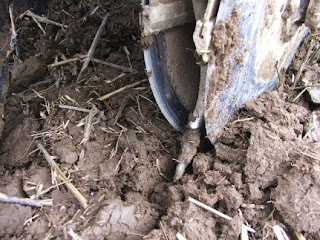 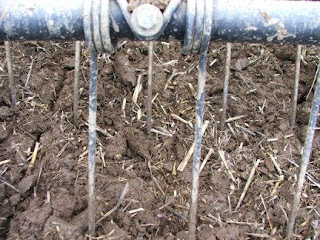 He decided against liquid fertilizer as I told him I couldn’t apply more than 10 gallons per acre. This is a bit of a lie as with the right orifice plates I can probably put 40 gallons on. But, I have a 200 gallon tank which is really heavy when full. (10-34 is I think 11lbs per gallon) When I put 20 gallons of fertilizer on then I have to fill up every 10 acres. It really cuts down my production and since none of my customers want to pay the new rate of $30 per acre I’ve decided to give everyone discounts but to set a few more restrictions on what I will do.
So he applied dry fertilizer with an air spreader. This worked out great for me as I could concentrate on planting.
We planted 145lbs per acre of Merrill wheat, or I think that is the name. I couldn't find any information on that spelling. It is a new disease resistant variety that I know very little about. Only that it costs $900 a ton and plants at the same weight per bushel as Tubbs. Farmer got a little upset with me that I ran a 100lbs out on the ground out of his powerbin. I noted that it was 50% dry fertilizer and that I had a new grain drill. As it was the dry that was still in the box when into the drill and caused one section of the drill to plant at a much lower rate than rest of the drill. Had to run the drill empty and clean it out. Planted at 1.4 million seed per acre average.
Everything went well and I did 95 acres in two half day plantings. The seed trench walls did tend to blowout kind of bad where there was no ground cover. (I was planting into dead prennial ryegrass sod.) When I looked behind the openers it appeared that the seeds were dropping into a little slot and the narrow 2 1/2” press wheels were pushing them firmly into the soft “almost mud.” The spring tooth harrow on the back of the drill then did it’s job by pulling all the loose dirt back on top of the row. There was very little seed on top of the ground and very few open trenches. I think it may all work.
Will also post some pictures…
Posted by buddeshepherd at 2:37 PM