The Sun comes out and I am of course not ready. Perhaps I will go fishing!

The rain has stopped and the sun is shining. My weather app says the rain will return in ten days. It is May 22. Should we cut hay? The retired fellow who comes out and helps in between garage sales and drinks a lot of coffee says the ground is too wet.

It I were home on the farm full time I would cut. I would set the mower narrow and mow 20 acres. I would not touch the hay for two days. On third day I would run the Tedder on it and spread it wide. Ted it again the fourth day. Hopefully rake and bale on the fifth day. Maybe... It always changes.

It is all academic as I have not adjusted the baler knives. The mower tractor is on the feed grinder and still has the duals on it. Plus, I didn't check the hydraulic pressures to see why the hydraulic system is so noisy, and I didn't fix the door latch.  I was also going to change the new disc mower PTO to 1000 rpm so there would be more of a choice of tractors to use.

Instead of doing actual useful work this winter I made feed, built a trailer that sort of works, took my White 2-60 apart and busted the exhaust manifold off, ordered parts which won't be here for a week, and otherwise did nothing useful. 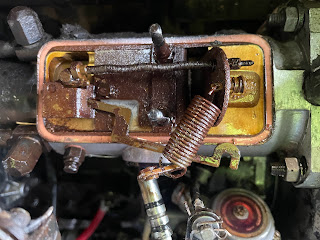 This what the inside of a CAV injector pump looks like. I replaced the o-rings on the throttle and fuel shut off shafts. I only had to take it apart four times! 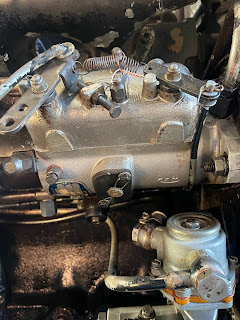 Will you look at that! All back together again. I even used my special SK wire twisting tool to affix the safety wire! 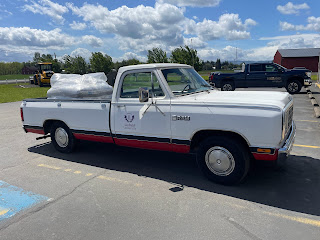 Thursday I was dispatched to find more Perennial Ryegrass seed. I replanted the Baseball field and was doing quite well till I returned from lunch and picked the wrong mark to start. Since we are planting at 5lbs per thousand square feet which is like 250lbs per acre. Half an acre or so overlap does go through the seed. I was able to talk baseball with a sales rep and score 500lbs of hard to find seed. Then I ended up with 800lbs. The college crummy is not as heavy duty as one might have expected! 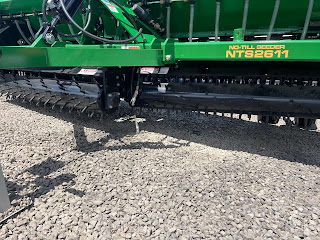 The seed company is right next to the International Dealer so I stopped in to look at Great Plains drill. I really want to try out this drill on our 11 acre practice field. I actually have been contemplating buying a small no-till drill and planting pasture, government conservation projects, and cover crop between Filbert rows. I am not sure I really want to deal with planting for those sort of people after working for a college for years. Not sure I have the patience.

One of the nephews got a swather out and cut five acres. This is good as it will put the pressure on to work on the stacker and the baler.

When it looks like an early spring we work like crazy and get everything ready to go. When it is a late and rainy spring we always seem to be behind.

Saturday I no-till planted barley into the dead spots in the clover field. I found a little clover to put with it. I planted the barley at something like 200lbs per acre and the clover at 5 lbs. This will be good for the hay as the barley and clover need rain to sprout as I did not roll the field after planting. So I figure the potential for a planting failure will offset the potential for a hay failure. 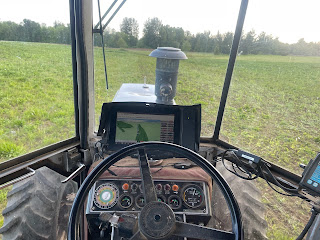 I could find a roller and pack the whopping five acres of barley or I could take the dog fishing.

What would the Lazy Farmer do?

Posted by buddeshepherd at 11:01 AM