We had a different Pastor in Church this morning. I enjoyed the sermon. I needed it. I am too uptight.

He quoted TS Elliot, "The Hollow Men," and reminisced about reading "On The Beach," many years ago. Then he quoted Dale Carnegie, "How to Stop Worrying and Start Living."

I wanted to call/text my daughter and talk about it. "On the Beach" is an awesome movie. (Having never read the book) plus TS Elliot. "The Hollow Men," is interesting in so many ways just as a poem but the Pastor's Biblical references and the "On The Beach," reference made it all so much more interesting to me. There was a time when I thought talking about things like that with my daughter was the most amazing thing in the world.

But alas, that that time has past. It is a different world now.

I went to my nephew's graduation yesterday. Him and his three other classmates seem happy and positive. It is Child Abuse to put your kid into the public school system if you have any values at all.

I often question my decision to work off the farm. I question even more my decision to get my daughter to attend the Young Writer's Conference at Sweet Briar college. I am not a particularly good parent.

However, when I decided to get an off the farm job I felt I had to make a decision. My dad had to go to a rest home. If he would have lived another year there would be no farm. This would have probably been a good thing for all involved, but that is another story.

I did not want to be a 50 year old truck driver, it is a tough life. I often get confused at what gear I am in. It is an 18 speed. Traffic is a little scary on HWY 18 on a Friday with 12 yards of gravel. I think it would be worse with a set of doubles or a 50ft trailer. There has got to be a niche for me...

The company doing the steam line project at my college needed truck drivers and they hired me for twice my hourly wage. I took a week of vacation time and drove dump truck. Saturday, my supervisor told me I could just work by myself if I wanted and I should just use the excavator to load myself. 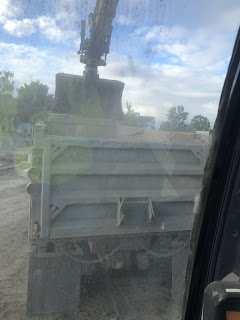 The bucket is quick attach, it rotates and tilts independently. It is really amazing to run. I am not good at running it but I have observed the real excavator driver using it and he is awesome.

JRT Mechanical seems to be a great place to work. I sent a photo to my supervisor documenting that I anciently broke the top board on the dumb truck with the excavator bucket. (The controls are opposite what I am used to and I was trying to learn new controls instead so switching the lever). I said he could take the cost of a new 2x10 out of my pay. He said it would be cheaper to just buy a new dump truck... 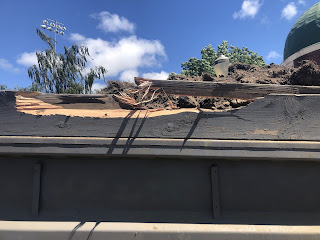 I probably should have turned the lever that changed the controls but I am so bad at running an excavator I thought I might as well learn the other system. I did get better...

I kind of hope they offer me a full time job.

My supervisor from the Grounds Department at the University I work at brought me coffee Saturday. I offered to let him run the excavator but he declined. It was kind of funny... 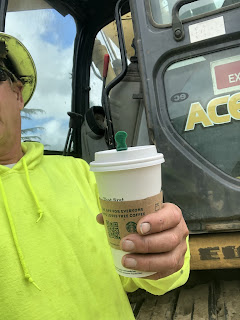 I don't think I can work at my daughter's college. It pays another $2 per hour. They have amazing facilities. People seem to love their jobs. That college is NOT going broke.

Posted by buddeshepherd at 2:50 PM