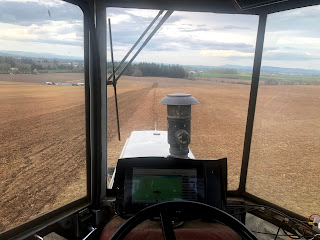 This is what I will be doing after Church today.

I am No-tilling radish seed. The radish will be used for covercrop.

I am planting on a compound slope. The GPS doesn't work correctly for this. I should have spent an extra $500 for tilt compensation when I bought my antenna. The antenna thinks the roof of the tractor is ground level so when you are on a long hillside it offsets you a foot one direction and overlaps a foot the other direction. If you have a compound slope it just gets weird. The antenna has "look ahead" software but that assumes the field is mostly level.

Also, I think my GPS company is calling it quits. www.farmergps.com

I probably should never have gone to work at the college.

I tried joining a "Regenerative Agriculture" facebook page. Bunch of f...g Democrats. (not that there is anything wrong with that) The ideology there is strong. I joined because there is going to be a lot of money dumped into this sort of thing in the future. But it is mostly emotion and anti-plowing activists. I may do a project making fertilizer pellets using wool, alfalfa, and a weird secret organic ingredient. It will be fun because of the science but I suspect I will not like the people I will be working for.

I miss The New Farm Magazine

I miss the Easter Sunday's of my youth. Mostly Mom making ham and mashed potatoes.

Edit: Yesterday I attended the memorial service for my Aunt. She was the last of the old generation. When I was little she was a little hard to get along with. Somewhere over the years she became nice. I think it had to do with her dementia. She was really sweet in her final years. My wife said it will be the opposite for me. I once was nice, but then I got grumpy... Small Children and dogs still like me so I guess all is well...

Posted by buddeshepherd at 10:03 AM