A random post after a bit of a break, or Why I have not made pig feed in three months

i have been busy...
While I have had a lot to say, I have not had time or energy to get on my computer. Raking leaves is surprisingly hard work.
I have not been reading blogs, writing blogs, thinking about blogs...
I've have read all the comments and I thank you for continuing to comment.
Some absolutely hilarious things have happened with my new job. I am pretty sure I can't comment about them...
My father took a turn for the worse two weeks or so ago. I had been spending my lunch breaks sitting with him at the rest home.
It was a bit difficult as he seemed to have a disconnected circuit in his brain which prevented him from talking. He wanted to say something.
Hospice provided morphine and not a speech therapist.
Procedures were followed.
He died Sunday.
Our family mythology will be that he seemed relived after my brother explained to him that all the crops were planted. (I finished planting after dark Saturday evening) And thus, he died at 5 a.m. This was the time he liked to get up every morning.
He had read a number of self-help books as a youth. He was very much a proponent of self betterment and the power of one's mind over emotions. His theory was that one needed to "hit the deck running," every morning or else you would, "not be good for anything the rest of the day."
Thus, every morning at 5:30 a.m. Dad would leap from bed, sprint to the bathroom, slash cold water on his face, sprint back the bedroom, pull up his overalls, bound down the stairs and noisily start the fire. Every morning... Barefoot in a faded blue nightgown, (yes he wore a nightgown), I can still his his bare feet running past my room when it was so cold the bathroom pipes were frozen. (to which he said, "oh! for pity-sakes!" and charged down the stairs.
I've never really subscribed to that theory, perhaps this is why I'm not a successful businessman.
In other news...
My father-in-law returned home midweek. (he broke his leg near the hip)
He has had a bit of a personality change after a month in a skilled nursing facility. This is not for the better. I'm a little worried about my wife's sanity.
My supervisor told me I needed to take a couple days off. I went to HR and found I could take a week off and still be paid. I'm not actually taking a whole week off at once.
Then I got called back to HR to discuss work events that I really wish I could tell you.
We will go with what I said and not what I heard..
I explained that while I did not seek out gossip about coworkers and one of the reasons was that I have poor impulse control and tend to blurt out comments which I think are funny at the time. Because I recognize that failing I avoid knowing things which could lead me to those social gaffs and I apologized for making the social gaff that I assumed led me to HR.
I was told it was bigger than my one comment.
I asked if people had hobbies outside of work, there was a pause and I suddenly realized that I had illustrated my tendency towards blurting out things which should be filtered. It got a laugh. And probably a comment in my permanent record.

Here are things which I found in the flowerbeds on Monday. You never know what you will find Monday morning! 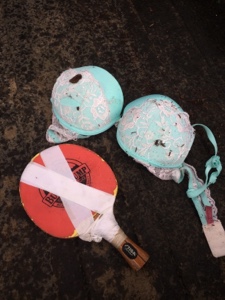 This is a padded woman's foundation garment, size 32B. Nice frilly lace on front and sides. A little mark mulch on it. Pictured with it is a broken ping-pong paddle. 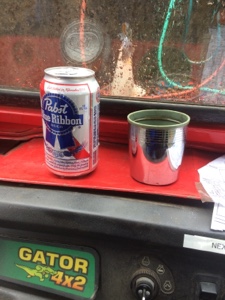 A full can of Pabst Blue Ribbon beer. I did not drink the beer, this a posed photography.

The human mind tends to make patterns out of random events. Please feel free. Found the items between the administration building and the another important building which I can never remember the name or purpose of. It is an imposing brick edifice from the original college.

Pictured below is my haul from the Previous Monday. 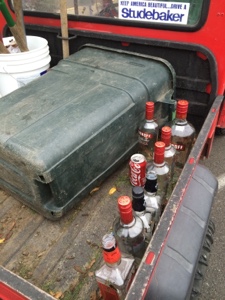 If you will look closely you will find the ratio of booze to mixer rather askew. 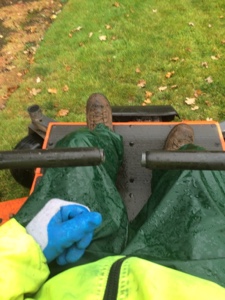 This is what it looks like when you are mowing a lawn in the rain.
Instead of "dig we must," for a motto, we have "mow we must."

Posted by buddeshepherd at 7:43 AM