What 21 bucks got me at my formerly favorite burger spot

Posting with an iPhone is not the best. The blogger iPhone app is pretty limited. Typing with your thumb is not for the ham fisted. However, the non-user-replaceable battery in my MacBook is dying and I need the correct screw driver to remove the back and it is just another thing I don't get done. (I of course already tried using my pocket knife...)
We had movies to return to RedBox and my wife was taking care of her elderly person. So, Lulu and I stopped the Sunday afternoon PBS marathon, parked the Lego train, put the battery powered RC helicopter on the charger, (so the cat could recover) and we went in to town.
I was just a touch on edge after managing to dump almost the whole pressure cooker of chicken soup stock down the drain whist attempting to fill a tupperware container.  Fearing the disapproval of my wife I considered actually buying a can of chicken broth at the store and not admitting I ruined her Sunday afternoon efforts. After some consideration with Lulu it was determined that Dad does occasionally screw up multiple things in the kitchen and that it is just best to admit one's stupidity.
We were going to have Chinese food but the prospect of grease, bland sauce, and msg resulted in a new plan.
We went to Alf's. Everybody loves Alf's. They have a monkey in a large cage.
Prices have gone up a little.
Lulu says it is because I don't get out much... 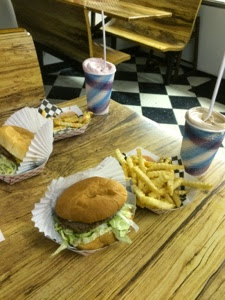 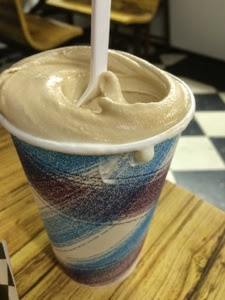