I actually accomplished something yesterday!
I removed almost all of the stuck bolts from Muddy Valley's grader blade. 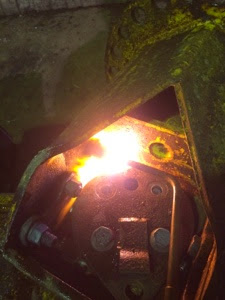 Almost all is not quite a success because the four remaining bolts are the bolts which were the problem.
However, it needed to be taken apart to get at the offending bolts and I did it. Took me a half hour after dark.
I've been attempting to get ready to plant for my neighbors.
I've been having hydraulic problems with the 2-155 I plant with.
So I ordered a new pump.
I got the wrong pump as I didn't realize difference between the two pumps was that the BODY of the pump was aluminum. I checked the end of the pump which is cast iron.
The pump arrived in November, I looked at it and thought it was correct.
I discovered it was wrong when I went to install it.
Please understand that changing the hydraulic pump on a White tractor involves being a contortionist. You can see the bolts but you can't reach them.
So... I started working on the other 2-155 butI also had to move the drill around so I connected the drill to the Minneapolis-Moline G1355 and the batteries promptly died.
But I have to move the three tractors around to wash things and test things and get the drill out of the way to make feed.
Yesterday it was the last straw. I was watching the store for my brother and didn't have time to set by the road jump starting a tractor.
I pulled the pin on the drill. Pulled the G1355 ahead with the forklift, then hooked to the drill and backed drill with forklift. 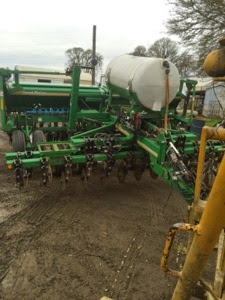 I was in the process of picking up the G1355 and moving it sideways but that was startling the neighbors so I quit.
Just as I was about to disassemble the Misery (MO) 2-155 UPS arrived with a new pump for the other tractor. I was quite excited until I remembered that I needed four o-rings.
I started working on the drill but then it started pouring down rain.
Muddy Valley showed up with his grader blade and so that distracted me for a while.
I went back to work on the drill but the grease in the greasegun was so cold it didn't want to pump.
I put the grease gun in front of the heater and put MuddyV's blade in the shop.
It started raining harder.
I gave up and got out the torch. Couldn't find the big air wrench.
Decided to use more heat.
Removed the bolts.
Broke two bolts.
Applied heat to the bolt centers till they were red hot. Going to let them cool and apply a mixture of acetone and ATF. 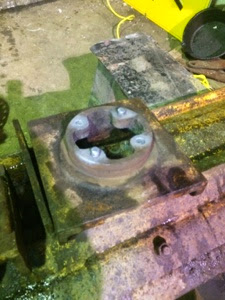 Went to put the goats away and remembered I left the lid off the bin of Peas.
Climbed the bin in the rain. Got angry and bent the motor mount on my auger. Got even more angry and bent it again. Got the lid on.
Went home and had roast beef...
And that is a day in the life of the Lazy Farmer...
Posted by buddeshepherd at 8:17 AM