I load straw and have a discussion and rewire things I built myself.

I think I have to have an employee so that I can just continue my life of doing weird random stuff and I can have someone else do ordinary jobs which have a beginning and an end.
Yesterday I loaded 53 bales of hay. The actual loading took perhaps fifteen minutes.
I was an hour late to the barn where the straw is stored as someone was at the shop buying sprayer parts. He was explaining to we how to plumb your sprayer with a three-way electric valve and we discussed the merits of a hydraulic power sprayer pump hooked to an auto-rate controller vs a three-way valve. This was very useful information and all would have been well but...
The squeeze loader died in front of the stack and that took an hour to bleed diesel lines and wonder why the pump lost its prime to begin with.
It took another hour to restack the stack as I lost four bales out of the bottom of the stack when I picked it up. Understand? The bottom of the stack. You pick it up by the bottom. So, you see this is a problem. You really have to restack the whole stack to get to the bottom.
Then it took an hour of conversation with the owner of the building's little helper. This was valuable as I found out they did not have the money to pay for the screenings I sold them and now I'm going to have to just pay my neighbor that I bought the screenings from and now my quick cash has turned to naught... (Like that? I used an archaic expression!)
I came home and fixed myself a pretty awesome ham and cheese omelette. Lunch went really well.
But, after lunch I had to go to the shop where the scrap man wanted to talk. He really likes to talk. This would not be so bad but he smells like cat poop.
Then a young farmer showed up who wants me to plant for him which led to a no-till discussion. Then the battery guy showed up and we got into a long discussion about Florida vs Hawaii and what you do on cruise ships.
Then another farmer showed up to buy a grain density scale and this gave me the break to move outside and discuss no-till planting closer to the no-till drill.
I should be changing disc opener bushings and no-till coulter bearings but I instead tackled the rats nest of wiring that is my home built switch box for the run/hold part of the acre and GPS.
It is quite a clever design.
I have a magnet switch which connects a circuit breaker when the drill is lowered and I'm planting. I used KC HiLites (headlight relays) relays as they are in stock at NAPA and CarQuest stores everywhere.
I have an on/off/manual switch so I can turn the acre counter off if I wish. There is also a double pole double throw switch for reversing an electric valve that controls the return line on my liquid fertilizer setup.
The complicated part is that the acre counter and sprayer monitor supply their own power for the run/hold switch so I have to isolate the circuits. I can't just plug them into one magnet switch. Also, the FarmerGPS takes a 12v signal and I did have that on a relay as well.
I took out one relay and changed the wiring so there was nothing outside of the switch box. People who are not me and are running my tractor don't care about my wiring and squish things under the seat if they are heavier than I.
Here is a photo of the wiring. 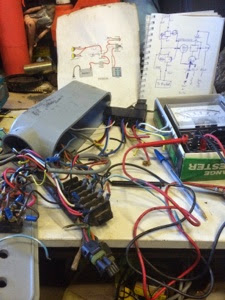 Posted by buddeshepherd at 8:09 AM