An interesting article about new agriculture. Don't Let Your Children Grow Up to be Farmers.
Everybody is looking for an angle to make money. Everybody is looking for the next best thing. There is always a seminar on clever new ways to farm. Organic farming and sustainability are really nice sounding terms.
There is no glory in writing about failure, but most of these new style farms are losing money.
This is the point where I offend all my farmer friends.
I suspect that real farming, the way God intended us to farm, is practiced only by the Amish and a few oddball hippies, and OhioFarmGirl.
I'm not sure mainstream production agriculture is not really farming, (my opinion as one who is involved in it). Sure we pride ourselves on feeding the world and we have the bumper stickers and we like to think we are some sort of protected class of folks, with our new combines that cost more than your house and our determination to farm 500 acres more than our neighbor.
But it ain't really farming in the centuries old traditions. We don't eat what we grow, we farm more ground than we can walk in a day, we don't raise animals, we don't have a balanced ecosystem on our farm, where what we grow feeds our "tractor," which fertilizes the ground which grows stuff we eat, and feed for our chickens, who give us eggs, and so on. And we are not really feeding the world. Providing cover crop for the Midwest perhaps, or grass for the golf courses of the world, noodles for Japan, but no one would starve if all the farmers in the Western half of this state went on strike. 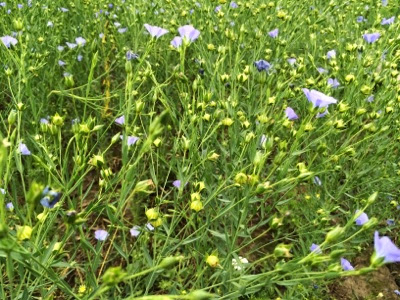 I'm not sure there is anything really wrong with this. Current trends towards bigger farms are leaving a few of us behind and some of us are more bitter than the rest.
But according to the census of agriculture, farms under 100 acres are increasing at a rapid rate.
I've found the new farmers quite interesting. Most of them annoy the heck out of me and so I kind of avoid them, but I like a few of them I've met. Well, perhaps two of them...or one...
With that in mind, I was just talking with Jose today and he told me about his friend who sold a goat for $20,000 and another friend who has 100 acres of fruit trees and is making big money.
Both of those people are not main stream agriculture.
There are two ways to be a farmer. The first is to rent what ever ground you can find and try to make it in traditional 20th century farming. Growing grass seed or commodity crops and doing trucking or custom work or what ever to bring in cash flow. You work with all the government farm programs and you fill out the paperwork and you get a young farmer loan and you go to endless farm meetings.
And then there are the other folks.
There is a lot of energy in farming which you see in small farms with young people working outside the  traditional farm service agency route. Most of these people just decide they want to farm and they go do it. Most also fail, but there are those who succeed.
If I were starting out in farming I would never set foot in the Farm Service Agency. Never go to one of those stupid seminars where the speaker gets paid a nice fee to tell you how to start a farm business and you know good and well that the speaker is up there because it is easier to get paid to tell people how to farm than it is too actually do the farming.
I can't use myself as an example because I am terrible at customer service and my feed business is failing because I refuse to answer the phone. And I'm not starting from scratch.
But...
Take feed as an example, this is what I should be doing. Feed prices in the farm stores are kind of outrageous. If I had ten acres of barley, ten acres of oats, five acres of flax, a truck load of alfalfa, and twenty tons or so of pea screenings I could sell a really good multipurpose feed, 16 percent protein and under $400 a ton. I would start small with my old equipment and a few customers and sell through word of mouth. I'm not going to Farmer's markets because sitting in a booth all day Saturday and Sunday and talking to the same five hippies does not really appeal to me. I don't have the time.
You want people to come to you.
I think in five years I could be as busy as I wanted to be. In fact, I think the only reason I'm not making feed every day right now is that I don't really want to.
Which brings us to the genetically modified labeling issue. My customers can't afford the certification. They are not certified nonprofits, they are not retired rich people, generally they can't even do Organic Certification. They sell by providing good tasting food raised locally and can show their customers where their ingredients come from. The new initiatives are written to make money for the certification agencies and to weed out people like my customers. The interesting things in farming are always done by passionate individual farmers.
And now my battery is dead and I have to go to work. Feeding the world! If you don't like farmers, don't talk with your mouthful! Going to go chop some genetically modified corn...and possibly do some field trails for Monsanto. Hoping to score another flying corn hat. I like flying corn hats...

Posted by buddeshepherd at 7:33 AM