A change of attitude and I attempt to salvage flax

I have decided to become an optimist. I read that optimists are well paid. In fact you can get paid for being an optimist, it is actually one of the 12 best jobs in America!  Then I realized that I now need reading glasses.
I have been somewhat embarrassed. In reviewing my blog I realize I may complain just a little bit. This is supposed to be funny. More of a light-hearted look at the misadventures of a reluctant farmer.
That whole combine fire thing, did as they most likely say in the burgeoning recreational chronic business in Oregon and Washing say, "harsh my mellow."
One must need to be familiar with the current colloquialisms if one wants to be "hip," something which I most certainly strive to be.
But, I digress...
Yes it is true that the combine did burn up and that my attempts at a restful vacation did not get off to a good start, but I must remember, no one died, I didn't have to walk, and I got pie...
It could just be bad luck, well not really BAD luck as, no one died, I didn't have to walk, and I got pie, but and three neighbor's offered to help combine.
The first neighbor to show up also had a few things go wrong. First he ran out of diesel, second, he got violently ill, then his father got violently ill...
The other neighbor who was getting ready to come over had his starter blow up on his combine. I mean it failed so badly it started a small fire.
My other neighbor has offered to help three times but I'm sort of afraid he will be struck by lightning and I've declined his offer of help. (but said thanks) Three friends are better than two friends and I really hate funerals.
But there is hope. After days of discussions with insurance companies and much prayer by the followers of Gorges Grouse, there may be an insurance settlement. AND the local farm equipment salvage yard has offered $3,500 for the charred combine and we can keep the header.
I'm afraid to discuss details due to the whole "sideways luck," issue that I have discussed in past posts. (Something always goes wrong followed by something going right but never so right that it negates the going wrong.)
Also, my father seem content that he is 95 years of age, although it still bothers him that he has been 95 for the past five years. I suggested that he be happy that he hasn't gotten any older. I'm not sure that really helped but he did give a chuckle.
In other news which I will deem positive, we are getting a warm rain which is sprouting all the worked ground so when it stops raining (which I'm sure it will at precisely the right time) we can spray out the sprout and plant. (And chop silage all at the same time.)
Yesterday I attempted to salvage toasted flax. It turns to mush with moisture. It is funny stuff. My brother took the hydraulic motor off the belt pickup and hooked it up to the unloading auger drive on the BBQ combine. This way he was able to unload the full tank of seed into a truck without using five gallon buckets. There was quite a bit of charred and wet flax around the edges of the tank. 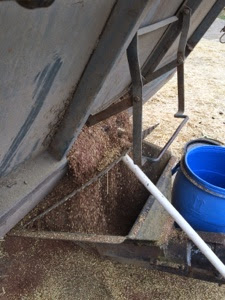 I made a screen to go into the throat of the auger and screened out much of the big chunks. I got something like 6,500lbs out of 7,500lbs in the tank. It is not good enough to go for seed but I can use it for chicken feed.
Of course it was raining while I was doing that but with my newfound sense of optimism I was happy, happy, happy!
Have a nice day!
Posted by buddeshepherd at 6:43 AM