If I could retain any of the information I read, I could be a weatherman.
I kind of need to be a weatherman in my spare time.
So, we have high-pressure, and a flocked sky. 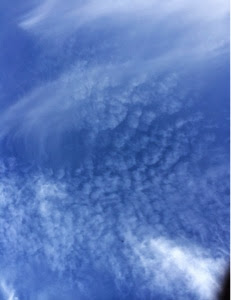 Our neighbor across the river, used to keep us updated on the weather.
So did the neighbor who lived on, what he called, poverty Ridge.
It wasn't really a red, and he really wasn't poor, but he was often correct on the weather.
A lot of times he came over after I had cut the hay, and wanted to know what the ;():&$@" I was doing cutting hay.
I would protest sometimes.
I start to say, but the weatherman said...
And that would lead to a commentary on what he thought of weatherman and their accuracy.
He didn't think much of them.
Then tne other neighbor would come over, and shout the weather forecast at me.
It wasn't what you'd call a forecast discussion, because he was deaf and he couldn't tell what I was saying anyway.
Sometimes, he would also talk about boobs. He really liked big boobs.
Big boobs have nothing to do with the weather, but he would still talk about them.
Here is a picture of the sky yesterday. I have hay down in little fields in a ten mile Square area.
WeatherBug and AccuWeather and the US weather service say it is not going to rain. 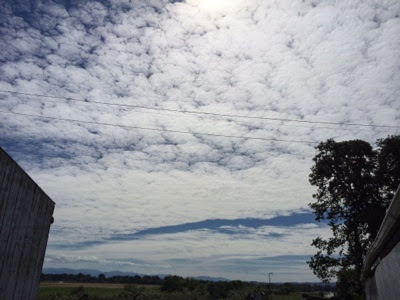 Posted by buddeshepherd at 7:33 AM