Who wudda thunk? I have friends!

I got several packages in the mail Monday...
I hurriedly ripped open the plain brown wrapping! You know when you get packages with plain brown wrapping there is something good inside! Of course this only exacerbates my problem of impulse buying on ebay, which I guess, makes me a chronic exacerbator.
I opened the smallest package first, cause I knew by the shape that the bigger package was the Jimi Hendrix albums I impulse bought on ebay...
After shredding several layers of brown paper I found a trove of bass plugs.
Including the original "JitterBug!"
It was from a nice fellow who I bought a vintage wax sealing jar lid from a while back. He likes to carry around a duck.
Which reminds me of a story about a fellow with a pet duck. He would take the duck with him everywhere he went. One day he decided to go to the movies.
They wouldn't let him take the duck!
So...he put the duck down his pants and snuck the duck into the theatre.
He sat down to watch the movie and was joined by a couple elderly ladies. They didn't seem to be paying him any mind so he decided to unzip his pants to let the duck watch the movie.
All of a sudden the elderly lady next to him set up with a start and elbowed her companion.
"Mildred would you look at that," she exclaimed with consternation!
"Oh, that's nothing I haven't seen before," her companion replied with a sniff.
"Well sure," the first lady replied, "But this one is eating my popcorn!" 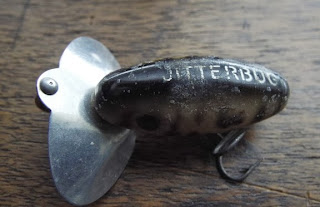 The second package also had a surprise! A really cool bonus album cover.
The Buddies! West Coast Action Sound. Not a lot of info on the Buddies. But Mr. Buddy Looks very determined! 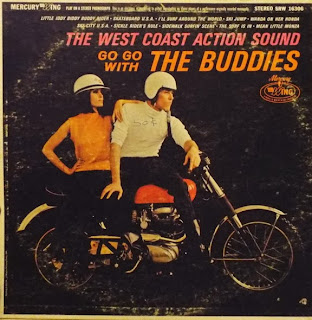 I only made it past the second song. Sort of a Beach Boys wannabe album. Ok for background music and an awesome album cover.
I do like surf music but the lyrics really annoy me after a while. I was looking for Ventures albums. They don't sing!
I need to be making feed but I have stomach cramps. It could have been the bean soup last night or it could be whatever felled my daughter last week. Or it could be I'm just worried about leaving on a trip, spending money, no retirement, cold weather, and general laziness. Or perhaps it is the five cups of coffee I used to wash down a handful of vitamins that are supposed to keep me from getting sick...

Here is a question for those who have traveled in the past decade.
Should I take my rather large MacBook Pro or should I take a sketchbook and write down my adventures? I could post them with my wife's iPhone.
I did not buy a wireless access point as Old Farmer did for his rambling adventures.
As of now I'm taking a rather large digital camera, MacBook Pro 17," and the assorted cords. I sort of hate to take anything of value that I can't keep on my body. I bought a MacBook 13" on ebay for $250 Monday but then the seller emailed my saying it wouldn't book properly and the battery was dead and he sent my my money back.
I thought about an Acer touch screen tablet which I could also use for GPS but didn't want to pay more than $250. I have a 14" ibook but it is now too slow with all the bloated stuff on the internet.
I'm really thinking about going without a computer.
I would if we were going to camp the whole time, but that doesn't sound like it is going to be practical.
Hmmmm....
Posted by buddeshepherd at 8:51 AM