We are at the Postcard Inn at Saint Petersburg Beach.
St. Pete is neat little town. Everyone tells us things have built up a lot and the problem with Florida is all the Northerners that have moved down here.
All the waitstaff are from other places, we found that out right away, they just pick up the accent after like six months.
There are a lot of old buildings from the 1960's-1970's. It is a lot cleaner than I remember Florida from the 1980's. It is cheaper to buy a house here than in Oregon.
I have a CDL, I could drive a dump truck here.
The Postcard Inn is old. It appears to have been recently renovated. Our room is straight out of Crate & Barrel. It looks nice. The beds are good, bathroom in in good shape, (other than one serious issue I will discuss at the end) and it is clean. 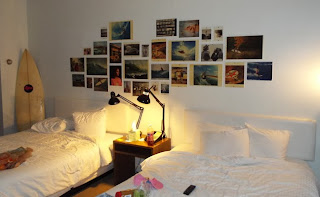 Hotel is set up so there is a big internal courtyard. There are nice comfy seats setting around. They have a fire pit and a ping pong table.
We did not try the cafe. There is a restaurant in the lobby which looks cool but we used up our budget for this week and we didn't try it.
Now here is the problem and it is the problem with most resort/beach hotels I've stayed in. On both coasts.
There is always something wrong.
In this case it was that the A/C seemed to be stuck on 60 degrees. This was not what we wanted when sick.
When we walked down the row of rooms to room 267 we noticed the doors were open on quite a few rooms. When we passed those rooms we could actually feel the cold air flowing out.
We did meet some nice local people who were in the process of getting smashed. They had even spent time in Oregon. We had a nice conversation. They had skied Bachelor.
They said if we called the front desk they would bring us a heater.
The phone was busy.
I went to the desk. I wish they would have been just a little more cheerful. I like places where the front desk people are happy.
They were out of heaters. After a half hour or so we got extra blankets. Two hours later they called an offered a heater.
I think they did care.
Since we are all a little grumpy I will reserve judgement. We are moving back to the Howard Johnson tomorrow. They had a beach front room available and it is a lot better to be sick when you can actually see the ocean.
I would stay here again, if the Howard Johnson was full.

Now here is some important/essential info on the Postcard Inn that you won't read in any guidebooks. It is not suitable for younger readers and somewhat embarrassing. However, if you are a guy of reasonable dimensions, beware of the toilets.
The distance between the seat and the water level in the toilet is such that if you adopt the classic thinker pose you can have a rather unpleasant experience, if you know what I mean. Being a rather fastidious person it was quite the traumatic situation for me. Being in the company of women I was unable to explain why I was screaming in the restroom. I said I saw a spider. But then they wanted to know why I needed someone to slide the packet of wet wipes under the door.
Posted by buddeshepherd at 6:21 PM