A couple weekends ago I was here at this very dock.
We are not fishing. 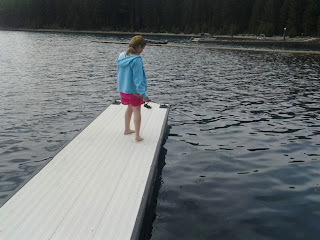 Lulu is mapping the lake floor with her Gumball 3000 camera.
The Gumball 3000 is a poor man's GoPro. She had a waterproof housing for it. We found an old T-shirt and a Mountain Dew can.
Ralph Goff has a GoPro.
The GoPro is a little more upscale than the incredibly cheap Gumball 3000 which is actually a Movu or something. The Gumball 3000 is a promotion for the coast to coast auto rally but I've forgotten the whole story.
Speaking of Gumball rallies, I bought the movie on 16mm. Anyone want to come over and watch it on the side of the big white barn?
Well, not right now... After dark... When it is not raining...
So, hypothetically speaking... Anyone up for Gumball Rally?
Posted by buddeshepherd at 8:44 AM