Farming on a small scale without vast reserve funding is a triage operation. You focus on what has the most value and most chance of survival.
We have been planting corn.
It has been a dry spring. We have had no really useful rain for a month. The plan was to strip-till, (working ground only in the row and planting into the strip) and avoid major tillage practices not deemed "conservation farming," by those employed by the gubment.
Some years ago we embraced conservation farming in a big way. We used to have a subscription to "The New Farm," a magazine put out by the Rodale Institute which were pioneers in what we new call "sustainable" agriculture.
The New Farm featured stories of regular farmers who switched to organic farming and had all sorts of really interesting ideas on crop rotations and tillage practices.
My dad was always a tinkerer and so it was not terribly difficult to get him to try new farming techniques.
So we bought a strip tiller.
It made the ground really rough. It was too much for the White plant-aire 5400.
And then we bought the White 5100 corn planter. We had been looking for a no-till planter since we had used a Case no-till in the late 1970's and early 1980's.
There were some spectacular misadventures. Like the time we no-tilled corn into a fescue field thinking the fescue roots would have eliminated compaction but not realize that those little tiny slugs also live in the summer time and that one bite will kill a baby corn plant.  OR just how rough a seven year old fescue field is when you are driving over it with a silage chopper.
However, it does not matter what we do, we can't top 25 ton corn.
We've applied lime, we've strip-tilled twice, we've disked, applied extra fertilizer, did tissue samples, hired consultants, bought special micro-nutrient fertilizer, it doesn't make any difference. Oh, there have been almost total failures but never anything above 30 ton.
The last time we had 35 ton corn we were farming with small tractors, using a Vermeer irrigator, and using a chisel plow, and glyphosate was expensive. 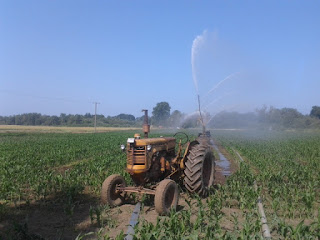 In fact, I would say, the last year we had 35 ton corn was the first year we used Round-up Ready (TM) corn.
This year was a strange year. It rained until it stopped, I mean that literally.
I watched the ground dry out and decided it was time to stop no-tilling. We worked every spot of bare ground we could get on, as soon as it dried out. All it takes is a couple passes with a heavy harrow and roller or the heavy disk and a harrow and roller and the surface structure of the soil is broken and sealed.
It actually worked.
The first field of corn had 2.5 ton of lime applied and worked in. I was going to get the strip-tiller which we had loaned to the neighbor. I decided to try the soil compaction meter.
No-compaction. So we went after the corn planter instead.
This is the first year we have ever planted corn with a cab tractor. It is not ours. 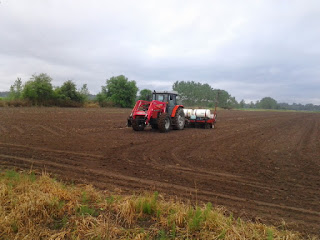 And now I must go to work. Besides, no one reads if I write too much... Perhaps more about planting corn tomorrow.
Posted by buddeshepherd at 7:45 AM