Give me one reason I should leave the house...

My wife and child left me this morning.
They took off early to visit wife's sister and attend the church where wife attended as a child. I said to be nice to anyone who had the name "Orin" on his belt and went back to sleep.
They won't be back for a couple days and I have work to do.
I planned on waiting a respectable amount of time past noon and then finish planting barley or at least attempt to start the hay stacker but then I got on the internet and discovered George Jones had died.
The president didn't even attend his funeral!
Heck, a basketball player switches to Soccer and the president calls him to congratulate him and that makes the news.
So I've been holding a tribute to George Jones all by myself, and if only the lawnmower would start... I do need to head into town.... 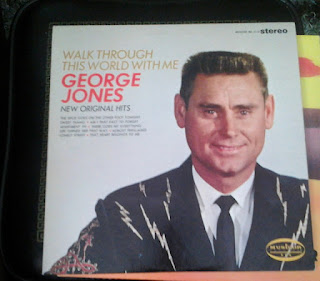 Started with George Jones, "Walk through the World With Me," got distracted by Johnny Cash and then on to Commander Cody, before coming back to George and Tammy, "Walk though this world With Me."
Strangely enough I discovered that George sounds amazingly like Tammy when you somehow get the speed selector set on 45 rpm and Fats Domino on 16 rpm.
I also never realized Commander Cody did Rose of San Antonio Rose. Wonder if it was Bobby Black on the pedal steel.
Somewhat interesting that George and Tammy were no longer together when they recorded "Hold On," and the rest of "Walk though the World with Me."
I suppose at some point I will have to emerge from the house. I have been given instructions to BBQ steaks which I am to eat for lunch the rest of the week.
Perhaps i should take more vitamin d.
Posted by buddeshepherd at 4:30 PM