Replacing the power supply capacitors on a Dynaco SCA-80

I own a Dynaco SCA-80 integrated amplifier. I bought it for a couple reasons.

First of all I am more likely to bid on weird crap when I am on eBay very late at night.

Secondly, Dynaco components from the 1960's will fit on a standard bookshelf.
Thirdly, I selectively filtered all the comments made by people on the internet to only include the positive.
So the insulting term, "sand amp" only registered in my head as the SCA-80 is not a tube amp so it won't have those leaky paper capacitors.
The SCA-80 has not been a quiet amp. There was that loud thump when I turned off the power. There was a lot of hiss and this steady hum which would sometimes decrease if I smacked the case sharply. We won't say how I discovered that, we shall just say it was a discovery.
I resorted to emailing Dan at Updatemydynaco.com who did not seem to resent my long rambling questions and comments that showed up in his email late at night. There is not a huge following for the SCA-80 amp, or at least it would seem. Updatemydynaco.com has a lot of information for replacing the huge capacitors found on early amplifiers. One big cap can be replaced with three smaller diameter caps and still fit in the mounting brackets.
Dan suggested the power supply capacitor as well as a couple other suggestions. I tried to pretend that I understood what he was talking about and I even resorted to reading up on electronic theory. Unfortunately my attention span is really short. And I got distracted by hand crank telephones. This occupied several weeks but my ebay sniping program was not working properly and I kept getting outbid on phone generators. This was probably a good thing as the first thing I would have done is try to trick my daughter and her cousins into shocking themselves.
But, I digress...
I decided against building a cluster of capacitors to replace the unobtainable 2200 uF large diameter capacitor which is actually three capacitors in one case, as I am not all that clever. Instead I bought a kit from the ebay seller qua-co.
The kit came with three 1,000 uF caps wired together on a terminal strip and really good instructions.
It sat in the box for quite a while. The amp is hooked up to our TV/dvd/Wii entertainment center and so it is hard to find an hour by myself when the smell of solder and overheated insulation will not disturb the rest of the house.
Two days ago I was left alone for the evening and I broke out the soldering iron. The installation was pretty simple. I can sort of read circuit schematics and so I could double check myself. The hardest part was removing the old solder. I don't have a desoldering tool.
I unsoldered one joint and then soldered the wires to the new capacitor set. There was enough wire length to do this. It kept things more simple.
Here is a photo. I have no idea why I am holding a screwdriver instead of a soldering iron. It is the only photo that is not blurry. 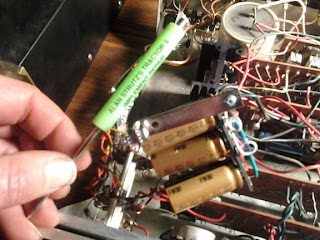 Now the important part.
I plugged the amp in and turned it on.
There was no explosion! The lights did not go out!
I was really amazed at how much replacing this one capacitor set quieted down the amp. The hum went away, and the hiss dropped to the point I can't hear it with the main speakers. Have not tried headphones yet.
I have not tried listening to records as we are working on the living room and the turntable has been removed. I shall see what happens later.
At this point I am quite happy.
And now I shall go to work. It is cold and raining.
Posted by buddeshepherd at 7:31 AM