I love Ashes Cafe and pie, but I kind of hate hay...

Today we attempted to bale hay. We had 20 acres cut in like five different fields. There has been a lot of dew in the mornings and the grass hay just does not want to dry. The ground is also wet and so it soaks up moisture from under the windrows.
We cut Monday and made narrow windrows so the ground would dry out and because I knew we would not be baling until we finished silage. Thursday we tore the windrows apart with a rotary fluffer. Friday we did it again as there were wet spots.
Today we raked 11.4 acres just outside of Amity. I intended to do more but people came after baler twine and chicken feed this morning and then we had to work on the irrigation pump. My helper fluffed the field with the rotary tedder. We set it to make windrows. 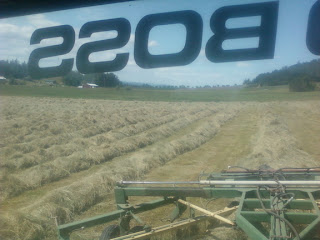 At 3 p.m. I double raked the windrows and at 4 p.m. we started baling. We made 110lb three-tie bales.
At some point after 6 p.m. I started stacking. I had to deliver three loads with the stacker. These were blocks of 80 bales.
My brother said the fellow was having dinner at the cafe but would go and unlock his gate for me. I did not want to stop the stacker on Hwy 99W and wait for the fellow to unlock the gate. So when I got my first load I stopped at Ashe's Cafe to see if the fellow was still there. I figured I would hit him up for a piece of pie or a milkshake as long as I was there as I had no money in my pocket.
The farmer was gone but it was suggested that if I wanted a milkshake I could pick it up on the way back. I was going to do that as it would give me an excuse to block 99W with a stacker while I went in to pick up my milkshake as the idiot Amity City manager managed to remove most of the parking in town. (You can get by with almost anything if you have a big truck or a farm vehicle with 4way flashers.)
Alas, I was broke. And so I declined the milkshake offer.
I walked back to Dad's Market parking lot and started the stacker. I looked in my rear view mirror and say the owner of Ashe's running after me with a box. She brought me a piece of rhubarb pie. She said her husband felt sorry for me and thought I should have some pie.
I almost hugged her but I have a fairly large personal distance and the pie did not have ice cream on it.
I was having my usually bad day and the gesture of a large slice of my favorite pie gave me the strength to brave Saturday traffic on a state highway. Brightened my whole week. Plus, it was really good pie. It tasted like it was straight out of the old Betty Crocker cookbook. Old fashioned crust, not too sweet, no Strawberries in it. Perfect!
So, we baled 675 bales. I picked up the rest of the field. There are six blocks of 56 bales in the field and I brought the last load home. The blocks will be picked up with a large squeeze and sat on a truck. A 40 foot trailer holds four blocks. 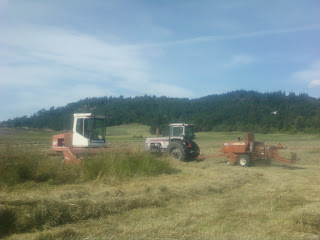 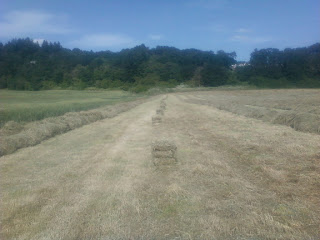 The bales are checked for moisture with a hand held meter you stab in the bale. We also have a meter that reads the moisture of the hay going through the baler. You can see the moisture as you bale. Judging from the weight of the last stack I picked up last night...the meter may not be working. Or someone wanted to finish the field! 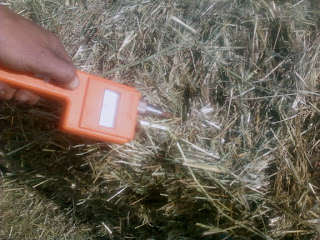 I don't like to work late but I do like task completion
And rhubarb pie...
Posted by buddeshepherd at 12:12 AM