The Life of a Bottom Feeder! Check out my new truck!!!

I have no pride. I also have no elbow for the blower on my new hammermill. We lost it on the highway... Oops!
But, that was not the point. I am such a total bottom feeder.
Today I got a new truck, and a new hay elevator. I really didn't need either but hey, they were free!
Ten years ago my cousin gave me a 40 foot Mayrath hay elevator. It was in the loft of his old barn. Last week the roof blew off so he said I should come and get the elevator. I'm not sure I have a use for it but I like it better than the other hay elevator I don't use. It will look really good setting on a pallet somewhere.
Then I attempted to spread fertilizer. That was not a success as the wind started blowing as soon as I got the spreader full, then the stupid thing kept plugging up so I averaged 75lbs instead of 150lbs per acre. It was only plugged on one side so that will make an interesting pattern. Of course this is a very old Allied dual spin spreader and a little International tractor we bought for practically nothing, and an ebay special calc-an-acre with GPS speed sensor that came from.... Yes you guessed it! Misslabeled or miss-spelled eBay auctions-which have fewer bids that when you correctly spell the auction titles!!! My secret to good deals on eBay! Great, I just admitted I take advantage of dyslexic people who can't spell properly! 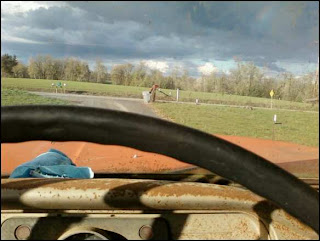 Then I went to get my new truck. It is an early 1960's GMC with a v-6 and a 16ft bed. It was full of bee's and there was so much algae on the windshield I could have started my own bio-fuel plant. BUT it has a working hoist and good grain racks and as a major bonus-the farmer who owned this beast plumbed hydraulic outlets on the side of the bed to run augers. You have to put the bed down to run the auger so I'm not sure how you would use it to dump into an auger but it would unload fertilizer out a bin on the back of the truck. 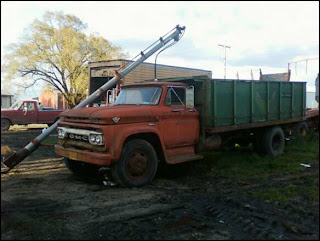 It runs good but the cab is totally rusted out. I guess I could just load it with scrap and drive it to the mill and leave it there.
In other stressful events I may have another 75 acres of corn to plant for someone who is really uptight. I'm not a corn planting expert but people think I am because I do no-till planting with a grain drill. That is totally different from setting a corn planter. And I have to drive really straight. Perhaps Ed Winkle will come out and run it for me. I guest write his blog perhaps he could guest plant my corn.
Posted by buddeshepherd at 10:48 PM

Email ThisBlogThis!Share to TwitterShare to FacebookShare to Pinterest
Labels: it