I was looking in the shop for some grommets for a neighbor and I was checking upstairs in the shop. As I was going back down the stairs I happened to look in the sort of secret hiding place where Chronic boy used to store the home made machine guns that made in the shop.
I kind of started the homemade toy submachine gun business when i made one a couple years ago. (Note-It was a TOY home made submachine gun. Sort of an artistic abstract sort of thing. Not something you would scare the neighbors with)
Chronic boy was very impressed and started building his own.
What caught my eye on this one was the walnut stock that looked very much like a Ruger 10/22.
My brother had a stainless 10/22 that he kept in our section of the shop under the work bench. He didn't shoot it much and it was not in an obvious open location so it was not checked on a regular basis.
Last winter I found a stainless 10/22 with no stock sitting on the back of the old gun cabinet in the shop. My brother started looking for his gun and couldn't find it.
Of course no one knew where the gun had come from. Chronic boy of course had no knowledge of this gun... Even though I had caught him in the past with my ammunition and as a result moved all my gun stuff out of the shop.
The stock that I found was of course the stock to the missing 10/22. He had welded up a receiver and barrel out of scrap metal. He made a scope out of pipe fittings. It sort of looks like a cross between an H&K and an AK-47. He held it all together with a couple rolls of duct tape and black electrical tape.
There are a couple things which really piss me off about this. 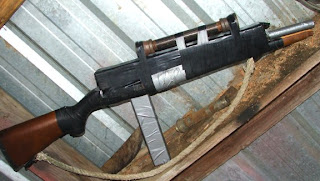 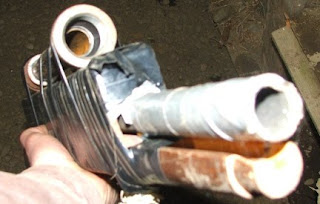 Of course there is the theft of the 10/22 and the bizarre disconnect with reality. (Well, he didn't really steal it, no he borrowed it... and wrapped it with a lot of duct tape, and kind of messed up a very nice gun.)
Then there is the fact that it was not made out of "scrap" metal. The pipe fittings were new black pipe out of the store, not used stuff out of the used pipe department.
And the fact that no blame will be assigned, there will be no apology or confession. Instead he will used the modern tactic of denial in the face of all evidence-and he will sort of get away with it.
We went through this before when his brother broke the windows in all the old cars below the hill. Total denial and of course his parents backed him up. Despite the fact that he and his friends were the only people on the farm with wrist rocket slingshots and despite the fact that he had been cutting up old bearings for the steel balls earlier in the day.
Without a resolution there is no renewal of trust.
I didn't make a scene.
There would be this big inquisition. I would be questioned on how and when I found the gun. Chronic boy could never admit to playing with toy guns as a 20 something. Uncle would get all uptight. Chronic boy would deny it all.
I would then get really angry and there would be another scene. I would probably point out that we all know that he gets stoned out behind the shop and that he is lazy and kind of incompetent. And the discussion would go down hill from there. The thing is I really don't give a rip if he gets stoned and fakes an arm injury for access to painkillers. I just don't like him stealing.
Posted by buddeshepherd at 10:14 PM