It is Wednesday evening and I am filthy and tired and I know I am not a mechanic.
I called my employee a Philistine yesterday. I like to use big words. Perhaps I should apologize. Sure it was in jest and it did sound better than, "you uncultured lout," but it really was somewhat rude to put someone down for not being as well read as you think they should be.
Speaking of Philistines, do you know what kind of car they drove? Well, of course that was a Studebaker-it says in the Bible that they sent forth a Champion. I suppose none of you really got that joke as Studebaker has not been sending forth Champions for like, what, 40 years....?
But I digress.
We were working on the International truck. I found a truck with a good engine to put into my truck with the bad engine. We were able to start it and drive it home. The license had expired in 1999 and it may not have run for a year or so before that. I did not buy a trip permit, screw you State of Oregon...
So, we started her up and off I drove down Highway 18. There was much clanking and banging from the drive train but I was grabbin' gears and just kept the peddle down. I was afraid if I stopped I would be stranded on the side of Highway 18 with no trip permit and my service truck license expired last month and I forgot to renew that as well.
The truck has a five and three speed and I really didn't want to slow down anyway as I couldn't remember exactly what gear pattern I shifted to get up to 45 mph and I sure was not going to try to shift down. A gear-jammer I am not.
About the time I got the brownie in high and the main box in fourth there was a terrific bang followed by a horrible clatter and rattle from somewhere in the transmission area. The bang had to have been a back-fire when I let off the gas to shift as the exhaust gaskets were shot.
I slowed down a bit and the noise lessoned.
I turned off onto Amity-Bellview highway and found things were quieter at 40 instead of 50. The shaking and shimming slowed greatly as the tires warmed and the flat spots relaxed from their decade of solitary reflection.
At the first turn there was a huge clatter and suddenly the engine became quite louder. I peered through the moss obscuring the rearview mirror to see one of the muffler bouncing off into the ditch.
The horrible clunking noise was now gone and I decided to see what this old girl would do. I got her up to 55 mph but then the power steering kind of stuck and I decided perhaps a little slow speed was in order. After all, a gear-jammer I am not.... 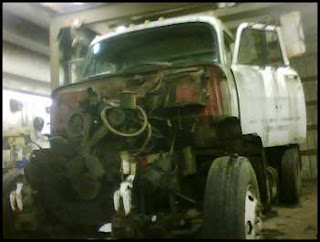 We have been tearing the truck apart to get at the engine. This is a very heavy old truck. It is quite stouter than my International with the 24 foot bed. It has a strange suspension setup for the cab. This makes it really hard to work on. I should just use a torch.
As my helper and I were working we were discussing literature. He is more of a film buff. I am more of a literature person. As sometimes happens we got on the subject of his girl friend. She plays the violin so I assume she is totally cultured and perhaps even an intellectual. I figure violin players are pretty highbrow sorts who sip tea with their little fingers extended. After learning that she played in a string quartet I admit to being a bit nervous when I talk to her. I  worry that I will inadvertently pass gas or express an admiration for banjo players or say "you-all." Actually, I've only talked to her twice-but I did think about all this the second time I talked to her.
And so it came about that I made some crack about the huntsman in Lady Chatterley's Lover. Be he had not read D.H. Lawrence or F. Scott Fitzgerald or any of the short list of authors which I thought every high school student had been forced to read. I suggested he ask his sophisticated girlfriend based on the memory that back in my day, it seemed that every self respecting violin paying intellectual college girl (of which I really only remember two) had ready Lady Chatterley's Lover-or at least the naughty parts.
And I called him a philistine.
She had not read the book.
I inquired more about his education, he is 26, and I guess kids just don't read anymore and they learn absolutely nothing in school... I guess you do not have to read D.H. Lawrence to find naughty stories when you can look at porn on the internet. Oh well.
Then I realized that I remembered nothing about the book. Other than the Huntsman seemed to be determined to do things which, when I deciphered the highbrow porn terms, could not have been very hygienic back in the days before daily baths and Charmin. The book that was more shall we say, "disturbing" was "Sons and Lovers" by the same author. That book explored more of the real-life sorts of tortured relationships that put lots of money into the pockets of modern day therapists.
So I suppose the real Philistine is myself. Who as a high school student opened the legendary high brow book of naughtiness and laughed. Laughed at D.H. Lawrence, and then used knowledge of the book to attempt to impress young Co-eds (with mixed results).
So, I suppose I could apologize. I figure young folks have pretty short attention spans these days so I think I'll let that one go...
Posted by buddeshepherd at 9:17 PM