I will never make it to age 91

I sold two truckloads of straw today. I sold them too cheap. I did not actually collect the money. But they are gone. I talked the truck driver into driving the squeeze to load the trucks as the straw is stored in old sheds where they used to raise turkeys and it is really hard to get in and out-without taking out a truss or a post.
The squeeze picks up a block of straw that is seven layers high. Each layer is made up of two rows of bales. Each row has four bales. Or you could say, 4 rows that are two wide. There are three tie layers which are too difficult for me to describe. The stacks are made with a NH 1085 balewagon which uses a computer to make the stacks. If it makes the stack wrong, calling it a bad name or hitting it really hard seems to help. Although it may do it again just out of spite.
But, that has nothing to to with the title of my post.
My post has to do with my lunch of which I did not take a photo.
I first microwaved a can of Chili. Specifically Nalley's old fashioned brand. We used to grow cucumbers for them years ago so I maintain a certain loyalty.
Then I found some bacon in the refrigerator. I started cooking a couple slices. Then I added a couple more, then I remembered the deer sausage, so I tossed in a couple of those. I poured off the bacon grease onto some dry dogfood for Stanley. That made him very very happy. I know that because he wagged his tale so hard it knocked over a bucket on the porch.
Next I cut up a couple strips of bacon into the chili. That was quite good. I also ate the deer sausage-but separately. Then I found a couple hard boiled eggs. They went better with the deer sausage.
I did have some bacon left when I got done. It looked lonely sitting on the paper plate and I hated to put it into the refrigerator-so I ate that as well. Then I had two three cups of coffee.
I had no vegetable. I am sure I will die at an early age.
I am now looking for a box of Ho-Ho's. I am sure Sadie has something good stashed away somewhere! This is the squeeze. The clamp is raise up so the trucker can get up on the load to tie it. 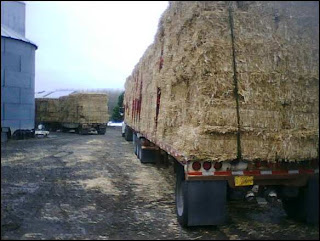 These are the finished loads, on the way out the driveway.

Posted by buddeshepherd at 1:09 PM