View out the kitchen window 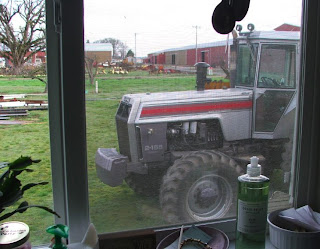 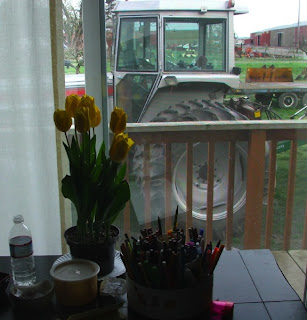 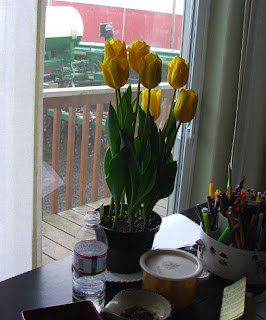 Have been having computer and internet problems. I'm sure many thousands of internet viewers were very upset at my lack of postings. Actually, I'm back to having motivational problems. Have also been trying to spend more evening and morning time with daughter.
But, wife and daughter are gone this morning. Went to Aunt's for spring break. I had plans but didn't mention them as my plans often are superseeded by the need to seed. That was a bad pun. I apologize... I wanted to do two things. 1. have a movie festival at the big white barn and 2. Go to the beach. Accu-weather and the US Weather service both promised lots of rain so I did not offer an alternative plan. Does not look like rain this morning.
I've been snooping on my wife's facebook page. Sometimes you end up in a different place than you thought you would... Yesterday I ate lunch with a friend and his family. His 16-year-old sister was prattling on about her boyfriends and how she liked to steal boys away from their girlfriends and how she liked money and how she was going to marry someone rich. Of course she is most likely doomed to failure, unless she makes it through college non-impregnated by some dumb-ass with a nice car and a good line of talk. Or stuck in a blue collar town with some moron develper guy who read Trumps' "The art of the Deal," and wears short pants in the middle of winter. Who knows she may break the mold, end up Anna Nicole Smith. "Small things Mama, Big things One day come," think that was the name of a Dave Edmonds song.
I want to hear that one set to banjo music at the next dailystrumpet birthday party.
Speaking of the Daily Strumpet the next party better not be at Aunt Elsie's garden with five old people and rain. We got to get out of this rut, kick out the jams so to speak... I'm tired of getting old and all this "oh the neighbors won't like, loud music, movies on the barn, banjo music, lack of beer, what ever..."
Speaking of life not turning out like you think... My wife grew up in Eugene, OR.
Now this is what she see's out her window in the morning. She really doesn't complain but sometimes I wonder what she really thinks...
Posted by buddeshepherd at 9:10 AM