I passed my test and test the RekOKut

Repairing my Rekokut k33h has turned into a bit of an obsession. That, and growing peppers in the greenhouse at work. The peppers are doing pretty well, I put them directly in front of the heat that so they're 80°. I'm a little worried about starting them in pots and balancingThe amount of moisture they need versus the amount of moisture applied is a little bit difficult.
Yesterday I took the health and safety portion of the pesticide applicators license test. I took off work and took the test at the local community college. They have pretty tight security in the testing department. Frankly, it was more difficult putting my wallet keys hat and coat into the locker that it was taking the test. I actually had to read the instructions.
And I think I startled the nice ladies with my out-of-control hair. I'm really happy they didn't tell me I looked like a clown on the Simpsons.
I got an 83% on the test. They have trick questions.
I probably would've done better on the test but I was up sussing about where to find a good stylus for a M91e Shure cartridge.
When I got home, I got ready to put the Engine into the to 135. But I kept thinking about hooking up the RekoKut.
My daughter was done with softball practice by eight and I went into the house.
She was up for a test run. So I brought the turntable into the living room and hooked it up to my vintage Dynaco System that is supposed to be the entertainment center.
I found the kinks Kronicle album and we cranked up Victoria, until the Clapper thing that turns the lights on kept cycling.
We listen to the Kinks, The Cars, and a couple other albums. On the way to to school this morning she started singing, Waterloo station. She was impressed because she had been there.
I'm doing my best to create an odd and eccentric daughter 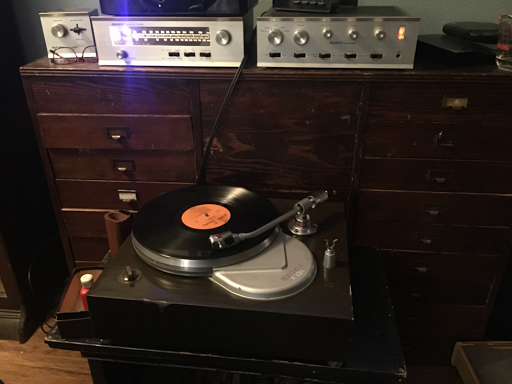 Posted by buddeshepherd at 12:38 PM