King Kong on the barn not very likely this weekend

It is most likely going to rain Friday and Saturday. I can't run the 16mm projector in the rain.
We are planting and getting ready to chop silage.
Monday or Tuesday my little helper had a crisis. However my brother's oldest son ran tractor for a while.
I had a field worked nicely and was waiting for a sprout. Got the sprout and started to work the field. Discovered I was actually just burying the weeds after working late with the harrow and roller.
Next day, broke the other harrow, broke the roller.
Found out the disk had a bearing out.
Finally decided on the old Do-all which is a combo field cultivator, stalk chopper, and harrow. I can pull it at 7.5 mph.
Had to then roll and pack the ground again but got rid of the sprout.
Decided on a "special" brand of annual ryegrass which is most likely a scam.
Waiting on seed.
Got the drill ready to plant.
2-155 won't lift drill.
Got covered in grease and hydraulic oil.
A/C fan failed on 2-155. Fan motor is of course made in China and failed because it was a piece of crap. Only a few years old.
Discovered the center hydraulic valve goes into bypass under heavy load. This is the valve I have always used to lift drill. Will now have to reprogram my brain to use the inside lever to lift drill.
Need to pack the worked ground one more time or use the old Minneapolis-Moline drill. The Great Plains no-till drill has a little too much down pressure for loose soil.
Not ready to chop silage Monday...
Now, you have to check out my welding and patching job on this roller. It was pretty much hacked up to begin with and I added to it. A true farmer repair. 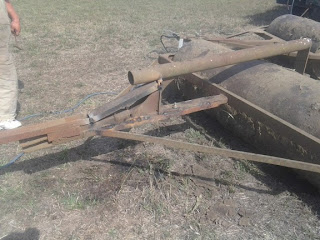 Note the multiple chunks of scrap metal used to lengthen tongue. Note the scabby welding! Note the heavy metal welded to light metal during different decades. Now that is real farming!
Posted by buddeshepherd at 7:34 AM