A relapse and more rambling about lawnmowers and tonearms

I though I was getting better.
Last night I started coughing again. I just stayed in bed.
I am still in bed and it is just past noon.
The daughter is now coughing as well.
I was warned it might come back but I of course though I would beat it...
Yesterday I loaded straw and it was cold and wet and windy. This was not unusual and I doubt it set me back. I've been mowing the Baseball field and Softball field all week and that was really cold.
I did give my heavy coat to my new workstudy assistant as she did not dress heavy enough and the weather changed mid afternoon on Friday. I was washing the mower in the rain and she looked so cold hauling pine needles in the rain that I made her take my coat. Then I forgot to stop my other student who was driving off with my other rain coat.
Fortunately the fellow who I replaced was a bit of a hoarder and has a stash of coats and coffee cups which he found after sports events and he had a heavy coat.
We are getting ready for a big track event. For some odd reason it was decided that cleaning under the pine tree between the tennis court and the train tracks was a high priority. My pretty new assistant was commandeered by the irrigation and special projects guy who was convinced that people spent a lot of time in that little area.
The only people I have seen evidence of enjoying that secluded spot are those who turn old PBR cans into chronic pipes and leave empty 16 oz steel reserve cans.
It was ok as everyone looked busy and my other assistant was free to clean up the stands and edge around the Softball field. 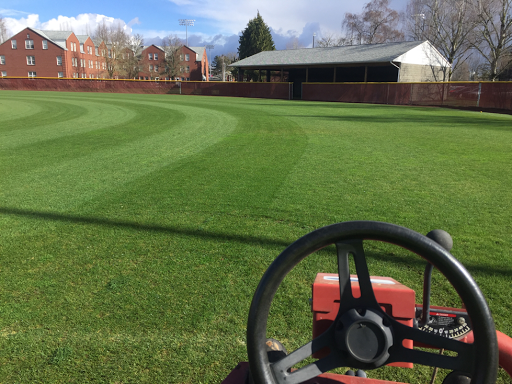 But I digress...
Yesterday I was going to sell the last of my annual ryegrass straw and clean up the shed. I arrived to find my extra pile of three-tie straw knocked over with a number of bales missing, only one stack of annual, and then the tire blew on the hay squeeze.
My landlord blocked access for the trucker as he had the well-drillers truck parked in the shed and it wouldn't start.
If the tyre would not have blown I could have had the truck half loaded before they started the dadburn truck.
As it was there were problems. I had to sell the guy two-tie straw and I had problems with several stacks. It took me much of the afternoon.
I had a lot to do when I got home but the guy who I replaced and is the new boiler man texted me to see if I had a chainlift although he called it a chainfall. I guess I'm more optimistic.
I had not used the device in the ten years since my wife got it at a yardsale. I had problems getting it to work and so I took it apart.
There is an aluminum wheel with little knobs on it which match holes on the ratcheting gear. This gear is threaded inside and I think you turn the knob to set the brake to release the chain. I think the tabs allow the gear to move to change the direction of the ratchet. 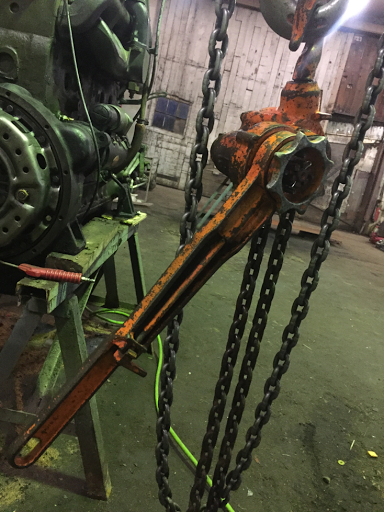 I drilled out the broken tabs, tapped the holes to 1/4" threads and installed socket head bolts with the heads to the inside. I turned down the heads to match the holes and applied red Loctite to the threads.
It seems to work. This took way too much time and was utterly a waste of precious time.
Lulu wanted to go to Maria's in Amity to shoot pool. I was cold and a little damp but she asked nicely and I figure it is only a matter of time before the figure out that under 21 age kids are not allowed behind the fake half wall to shoot pool when the other half of the Mexican restaurant is also a pub.
The non-Mexican owner figured it out when I showed up with my daughter to play. But, he let us play Foosball for free and we had overpriced Mexican soda pop to make up for it.
Lulu beat me multiple times.
Later that evening I retired to work on the Rek-o-kut.
I am having trouble determining the distance from the spindle to the pivot point on the tone arm. I wanted to use the old Fairchild 282 mounting holes but they are slightly different.
Now I have discovered that the cartridge is not mounted according the the Rek-o-kut specs which makes the effective length of the tonearm different.
I am researching this... 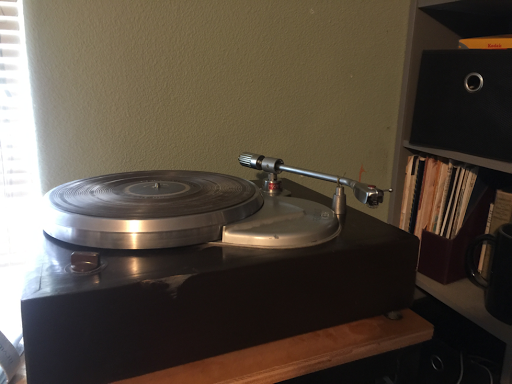 I should be studying for my pesticide applicators license which I most likely will fail. However, I can explain to you the difference between the Baerwaold and the Loefgren theory of calculating tonearm mounting distances to minimize distortion when mounting tonearms.
Somewhere in my head there is a switch that is set incorrectly. There might be two or three...
In a side note, since this post is already so long no one will read it...
This pesticide applicator license pretty much explains why we voted for Trump and why I am overjoyed at his pick for head of the EPA and Education department. The bureaucratic rules and regulations to do anything in the country are insane and most are BS. I spent 8 hours learning the obvious, the pesticide label is the law and the instructions, look to it to find your safety equipment and how to use. If you look at the ingredients and use it for something that is not on the label you had better lie because it is illegal.
There was a discussion of how to kill the bamboo that is pushing up the rubber playground mat at the preschool. I pointed out that we have over a month when there are no children there. Then I kept my mouth shut. As we say out in the country "Shoot Shovel and Shutup"
Also, it is not in my area anymore to I really no longer care... But... If you pick a cold and overcast day and apply crossbow to the recently cut tips of the bamboo they tend to not grow as fast. Hypothetically, I read that somewhere. Actually a local city was experimenting with this direct application of crossbow and glyphosate to control blackberries without spraying the volatile 2, 4-D Esters.

A guide to making protractors and solving equations for proper tonearm alightment and mounting.
Posted by buddeshepherd at 1:21 PM