We are on vacation. I'm not much of a vacation taker. However, I said if we are taking grandpa we are going to Florida for Christmas and my wife bought tickets on sale.
It was more of a joke statement.
But, here we are.
We left Portland in the pouring rain. There was just a little problem with the am/pm thing. We thought we were leavng at 12 noon on Christmas Eve. The tickets were for 12:30 midnight on the Eve of Christmas Eve.
I was able to take off at 3 pm and we went to my wife's sisters house for clam chowder and they gave us a ride to the airport. It was a dark and stormy night.
There was a mixup on the flight. The airline changed planes and all the people who  had booked four months in advance got their seats all mixed up.
There were some unhappy folks. One large family of immigrants were quite upset. The father called customer service to complain even though their only change was that the family of six was divided into two groups of three. Since the rows were three on one side of the aisle and three on the other side this really made pretty good sense.
We got two seats in two consecutive rows and one seat a couple rows up. But they were window seats.
My wife asked politely and the stewardess talked to the very nice Korean family and they agreed to switch seats so my wife and daughter could sit together.
I was watching to see if wife and daughter were getting settled and the 20-something kind of greasy guy that had the aisle seat slipped in and took my window seat.
I was a little upset at first but then I realized he really kind of smelled bad.
Sitting by the aisle gave me at least the hope of escape.
My bad luck worked in my favor this trip as it soon became apparent the the foul smelling duck that has stalked me in the past had somehow followed me past the TSA outpost and was in fact on the flight with me. He was quite happy that I encouraged him to quack and soon I was enveloped by his familiar essence and reassured by his familiar quack. It improved my flight considerably. He put his headphones on and didn't even look at me throughout the flight.
We arrived in Houston three and a half hours later. My brain attempted to escape through my left eye socket. It was rather painful. I took a decongestant but it really didn't help that much. We got slushy drinks at the Houston airport. My wife's sister made delicious ham sandwiches. I lost half my hearing and felt foggy and disorientated the rest of the way to Tampa.
My wife got us set up with a rental car and took us to Madeira Beach where she had found us a condo on AirB and B. It was very nice. We overlook the inland waterway and have a pool.
The first order of business was to hit the beach. The water seemed just a little chilly. But then we thought of the ocean at Lincoln City and it seemed much warmer. The sand is incredibly white and soft. 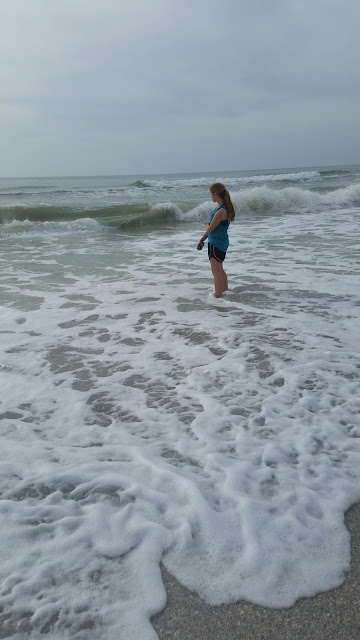 We woke up Christmas morning to a beautiful day. It is hard to imagine Christmas and nice weather together. Christmas is the bright spot in the middle of a cold dreary winter. You can't have snowmen taped to the window when it is 80 degrees F.
After three cups of coffee and a simple gift exchange the ladies took to the beach and I took a nap.
Later we did a little exploring. We were going to take in a Christmas buffet but ended up at a Thai/Sushi restaurant. The chicken was a little dry and a bit bland. I over applied the hot sauce and that really upset the duck.
Later in the evening Lulu and I took a walk on the beach. All was fine until the duck decided to speak up in front of a nice couple having a romantic stroll on the beach. Twice...
Apparently the sound of the ocean was not loud enough to cover the quack and the couple seemed somewhat nonplussed. Lulu was quite indignant and tried to push me into the ocean. I think my daughter does not really appreciate me the way she should. It was not me, I'm very polite, it was that rude duck. 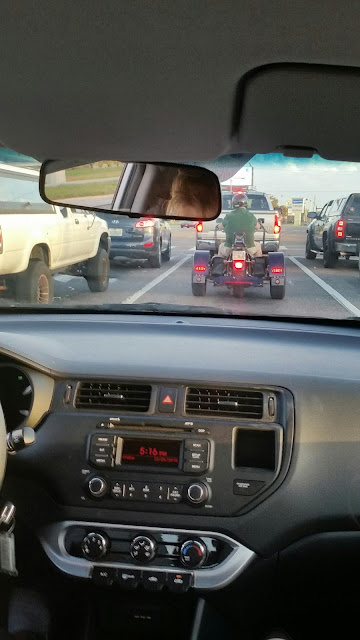 We capped off the evening with a trip to Wafflehouse. They never close. There were locals. They were all very polite. There was a family out on a date. Mom had a new boyfriend. The daughter had a new baby. Mom also had a five year old daughter. The boyfriend was showing the girls his Harley. Lots of people ride Harleys here. No one wears a helmet.
Except for this guy (see above photo) who not only had a helmet but also had training wheels. Nice to see someone concerned about safety.

There was also a nice older lady with a Crystal pendant. It had amazing healing powers. She introduced herself to the family. Her son was from New Jersey, he said he had a computer IT degree and was a certified hacker. He wouldn't give the nice lady on the date (who had either a very good bra or new boobs) computer advice as he was on vacation but he did wish everyone Merry Christmas.
We had a good day.
It is now midnight and we are thinking of going swimming in the heated pool. It is midnight and we are still on Oregon time. We may just stay on Oregon time and eat every night at Waffle House at 11 p.m.
Merry Christmas to you all!!! 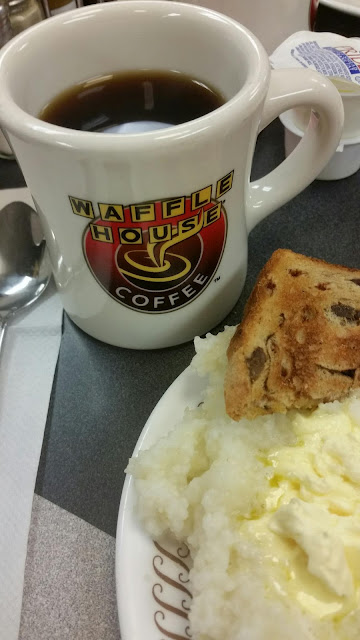