I thought I posted at 3 a.m.
Last night I started coughing and finally just got up and set in the easy chair for a while.
I wrote a slightly funny post about it.
But it has disappeared.
It had to do with chopping silage and had a picture of a rainbow and a Minneapolis-Moline tractor and a hay rake... 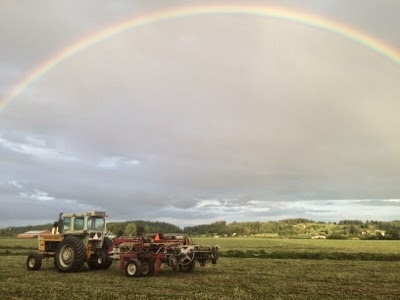 That tractor and that rake are two of my best buys.
The moline G1355 allowed me to farm, which was probably a bad idea.
The recent rake purchase really is invaluable. It has the power to rake wet clover! And as per terms of my loan agreement, I  not allowed to loan it! 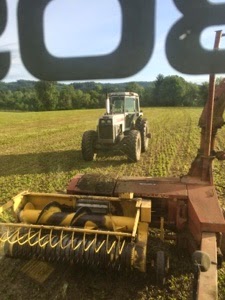 Towing the dead 2-155 it was not a good purchase...
In other news...
I have been listening to Amazon Prime music on my iPhone while chopping silage. They switch around the free music so all my Joan Jett is no longer available, as well as Dr. Feelgood and the Kingbees, but The Band and Commander Cody is still available.
And I own the Vern Gosden CD...
And three billy Jo shaver albums. (Where you want it buddy, the face or the gut, and "if you don't love Jesus you can go to hell")
So, after listening to the same Social Distortion song three rotations in a row, I tried switching to FM 101.1 and talk radio.
Now I know that in this day and age there is no freedom of speech so this blog may get deleted from this observation but it is kind of funny.
I'm listening to conservative talk FM radio.
It is the only conservative FM talk radio station.
during the news break for Lars Larsen, they bring in the entertainment commentator who is queerer than a pink three-dollar bill. And he is getting quite giddy about a musical coming to Portland. He got to go back stage. He starts talking about musicals and the thrill of theater and I had to chuckle.
As I changed the station I could imagine radios clicking off all over the state. Not a lot of Lars Larsen listeners who care about entertainment news as breathlessly delivered by a lisping gay entertainment reporter.
Also, just how many in the Portland gay community are listening to Lars?
I could imagine (but try not to) a gay coffee klatch, listening to Lars and sipping coffee, holding their little fingers out, and giggling...
"Say Mufassa!"
"No, no, no, no, don't say it,"
"Mufassa,!"
"Now say Lars Larsen..."
Anyway, I say, Way to go FM 101.1
You sent me back to my weird iTunes playlist once again...