Today I rebuilt the hydraulic valves on my White 2-155. There was a leak in the center of the valve body so I had to take it apart. I know that the main reason people read my blog is for my thrilling descriptions of tractor repairs and my issues with being stalked by a duck. (Who resumed stalking me yesterday, much to the distress of those around me) 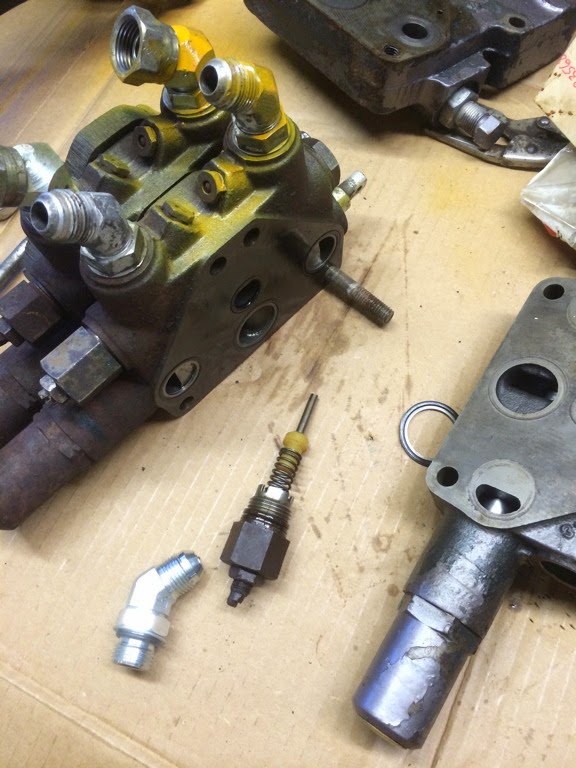 I had instructions.
However, I no longer have the concentration ability to actually follow instructions. My mind wanders. 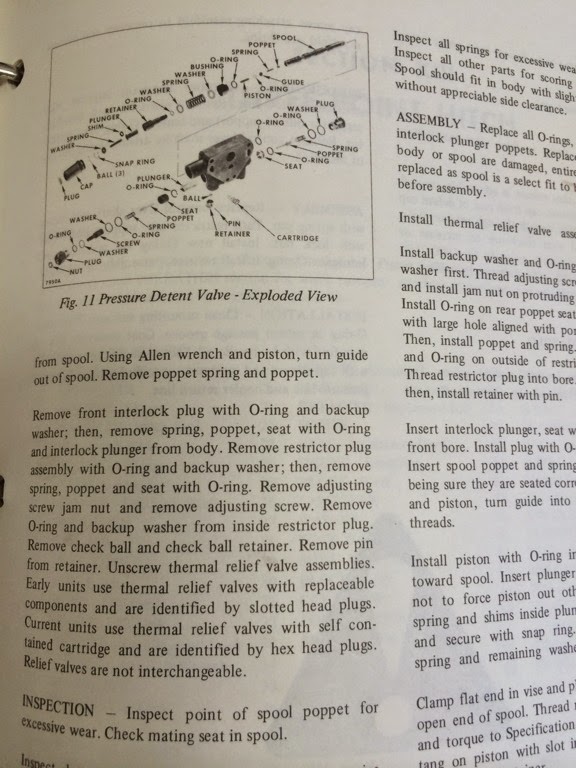 I pretty much just guessed...
It took a while. Like three days. Of course I didn't work on it for three days straight... But I did start on the project Tuesday or Wednesday.
There are always other issues. For example my little helper is disking 80 acres with the other 2-155. It developed a huge hydraulic leak under the cab. He needed help. I made several sarcastic comments about rocket science and tractor floor removals. He was not amused and accused me of being a grump.
I removed the floor and the offending hose and then told him to make the new hose and put it back together again. He found another leak, the power steering return hose was leaking. The leak was covered by a clamp and since it is low pressure it just dribbled.
Of course it was a steel line and was too worn to weld so decisions had to be made. The line had a sharp bend which prevented me from replacing it with a hose. So, I needed to cut the steel line and then make a short hose with a special fitting which clamped itself onto the steel line. That would allow us to keep the sharp bend without messing with elbows and adapters and stuff.
During the discussion a well educated and progressive fellow from across the river came to visit. (This is a long story.) I do like the fellow so I'm not really making fun of him. But it is amusing.
People who have lived in New York City never understand that we have higher thoughts. Sure it is guns, country western, tractors, pickup trucks, and we generally go to quite a bit of trouble to not let other farmers know if we have read Tolstoy or occasionally go to the ballet (I don't) but it does happen. We do occasionally have higher thoughts. Not that often but occasionally. Why just last week realized I had forgotten the difference between modernism and post modernism and wondered if my somewhat cynical view of life had to do with nihilistic influences in my youth. Then it came to be that I had no idea what any of those terms meant and so I looked them all up on my iphone. This would have been a moment of higher learning but I got distracted by photobombs and family photos gone wrong and I still am somewhat confused...
But, I digress...
He wanted to see Dad who was not in the best shape yesterday. This got us onto a philosophical bent which lead to him declaring that we were "authentic" farmers and was of the opinion that there was money to be made from our authenticity.
Of course he has rented his farm to a modern farmer who we all dislike. He thinks he has the best of the fellow but he just doesn't know how much the guy farms and how little he really cares about contracts-You can always apologize later... or not....
I suspect that he is wrong, we are inauthentic farmers and the short guy with the ego issues and the funny handshake is the authentic farmer of today.
Then my chicken rancher friend showed up and it was a regular love fest. I noted that Chicken Little had been interviewed by Slate and our friend was amazed that us farmers read such progressive online sites. (You know, I didn't say I liked Slate Magazine. I wanted to say I only read it for the pictures but the conversation was moving pretty fast for someone with my lack of concentration.)
So while this was all going on my little helper was waiting for me to tell him what to do. I responded with some irritation which hurt his feelings and so I apologized and showed him how to repair the hose.
But...
All this meant that I was not getting the valves repaired.
I put it all together backwards and had to take them apart again this morning. I of course made two trips to town for o-rings. I said bad things about AGCO and the insane parts prices and swore to never buy anything new from those $%^&*.
But, the valves don't leak and I chopped two loads of silage for the dairy next door and disked ten acres of ryegrass ground this evening.
I had no deep philosophical thoughts while driving tractor today.
Mostly I thought about boobies how I was going to get the field worked and if I should bale the flax or try to no-till though it.
I think I fixed the problem with the hydraulics on the tractor. It tended to get hot and make a lot of noise like the bypass was running all the time. It no longer makes noise.
After repairing the vale it was still buzzing so I plugged a gauge into the remotes and at 2,000 rpm the pressure shot up to 2600lbs when activated. The seal on the compensator valve on the pump is no longer there so I turned the compensator down to 2200lbs. After much fooling around I think I have it set so when you first pull the lever it goes to 2400 and then drops to 2200 and holds. This is what I understand from reading the book. The adjustment is quite touchy. I centerpunched it and hope it doesn't move.
And that is more information than you probably wanted to read, other than Orin who may have to do this to his 2-135 one day but is probably too busy to read the blog anyway...
Posted by buddeshepherd at 11:30 PM