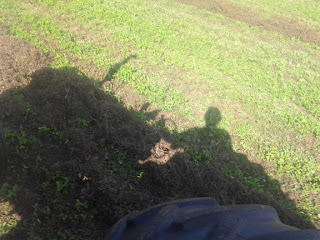 Unless I bale that last little bit of wheat straw in the back corner of the farm I forgot about, or I drive 10 miles to bale some oat straw that someone said they wanted but now won't take because it got rained on. Straw that I did not have time to bale but I like the guy whose straw it is and hate to see him stuck with windrows in the field he wants to farm.
But I digress,
I finished hay at 11 pm Saturday evening.
It has taken me a day to deal with the frustration that came from making and attempting to stack wet hay. After dark the moisture came up really fast. The paint is worn off the second table of the stacker. This is where the bale layers are formed. The damp hay won't slide on the bare metal. This was not good. It made for a lot of hand stacking.
But I pushed on. 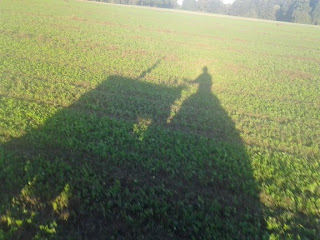 I actually brought the baler home and cleaned up the field yesterday.
Some of the clover hay was heating up in the baler. I guess the hay preservative is supposed to make it all ok. It will go through a sweat and then be ok.
Or so said the sworn testimonials I've read. 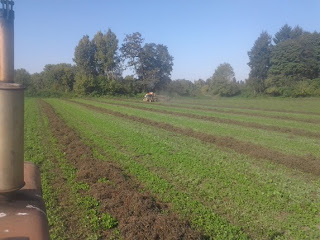 Now it is on to planting, corn silage, working ground, fixing a truck, fixing a dump box, cleaning stuff up, finding the rotary mower and mowing some hay fields... and it never ends....
Posted by buddeshepherd at 7:47 AM