I'm setting in my living room watching it mist on the hay stacks out side my window. I think my brother is working. I can hear crashing and clunking outside.
This is what the hay looked like yesterday... 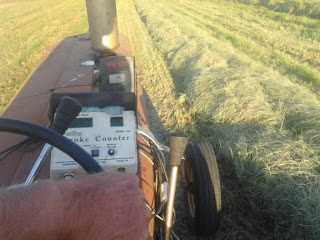 I baled Teff with the 656 hydro. Sort of funny to hook a $20,000 baler to a free tractor which you can tell was free by looking at it. But, as my dear departed mother used to say, "poor people have poor ways..."

We have spent a week trying to get alfalfa/timothy hay and Teff Hay dry enough to bale. Yesterday I said, @#$%^& and also, "oh fiddle," and baled it. We mixed up a triple rate batch of $150 a gallon hay preservative and a lot of molasses and applied it liberally.

And I baled at 20 percent moisture and at times, just a scoche more...

Having a moisture testor sensor in the bale chamber is a blessing and perhaps a curse... The moisture in the Teff hay climbed 2-4 points in the bale as measured yesterday.

The alfalfa is third cutting. I baled it at 14 percent at 3 p.m. and 85 degrees. It had been cut for five days and I fluffed it every day but.... and this is a big Butt.... it had stem moisture.  I baled it anyway.

I picked up two loads with the stacker last night but it was so damp out that the bales would not slide on the table. I looked at the evening sky, it was red, so I went home. I think that may have been a mistake.

Doesn't look good for baling clover hay today. I wouldn't be so annoyed but this was to be the last good day of the year. The weather says scattered showers till next spring.

I must call my neighbor to see if he will haul my ten remaining blocks of 2 tie wheat straw into the barn for me. I don't really want to bug him. Perhaps they will haul themselves...
Posted by buddeshepherd at 8:31 AM