This is what I've been sort of working on.
I called my local dealer but found that the service manager who knew all about White tractors has retired. His successor offered to look it up in the book but I declined. Didn't see much point as I also have the book.
I then called O'Brien County Implement and the service tech said it had been a long time since he had worked on one but gave me encouragement. "Those kingpins can be hard to get out. Sometimes we use a torch!"
So then I went to see another dealer to look at a baler. On the way I stopped to check out a potential source for straw to bale. He is buying his own big baler. It makes sense for him. I'm tired of baling straw anyway. I really dislike having to fight for a difference of $5 per ton. However, if I do get that 1.2 million dollars I am going to remember who my friends were when I was working my arse off for that $5 per ton.
But, I digress.
At the dealer I bought this special penetrating oil that is supposed to freeze the bolt so the oil can get into the threads when the bolt expands and contracts. And I bought some longer metric bolts so I could use them to pull the caps off the king pins. 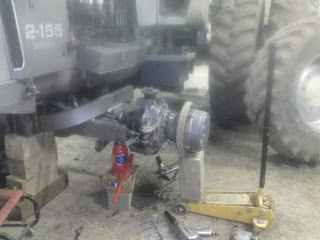 So you take the front wheel off. You take the bolts out of the caps over the kingpins. 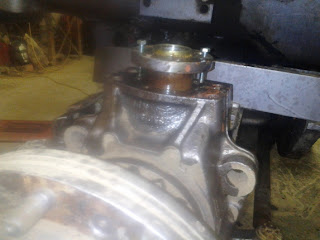 Then you pull two bolts off of the wheel hub cover and thread them into the 10mm holes in the kingpin bearing holder. 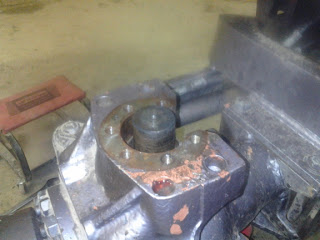 Then you pray it will come out. I used a lot of penetrating oil. The freeze stuff didn't really work. ATF and acetone works the best.
The bushing/bearing is a non greaseable fiber insert. It seems to have glued itself to the kingpin. I have no idea what this means.
I also have no idea if I should completely pull the wheel hubs apart or just put new bushings in it and sell it and then buy a 185 with a cummins or quit farming or go blind.
Of course the bottom bushing is stuck. I ruined the threads in one puller hole. I am going to try tapping the hole today. This will not end well.
I should try tapping the admiral instead.
I will feel like tapping the admiral after I go out to the shop and attempt to help my father sell a hay core sampler probe. I wish my brother would do it for me. He should be consumed with guilt after taking a month off and then driving truck all week.
I hate people with real jobs.  People with real jobs slightly annoy me.
Have a nice day...
Posted by buddeshepherd at 8:37 AM