Yesterday was the first day of the rest of my Life?

Took my daughter to school today. She keeps growing up. She listened to Lefty Frizzell, Jimi Hendricks,  and Bunny Wailer- We skipped over Hank Williams III as he swears. We didn't get to "Dust on the Bible," before we got to school, but it was next on the playlist...
She will either grow up to be well read with a broad appreciation for different music and information, or she will be freakin' skitzo... Time will tell. 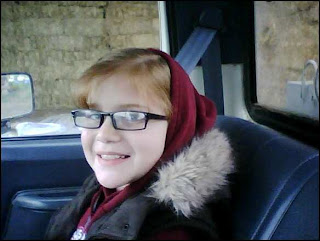 Here she is with her new glasses.
This is what is going on in No-Till news in my life...
Something happened to the first half of the week.  It it is gone! Today is thursday and it is raining. I've been planting. I've not been super productive. I think I've only done 80 acres so far this week. Planting Dinsdale (sp?) spring peas. It is amazing how well this drill works with large seeds. I have the Loup planter monitor hooked up. It likes the big seeds and gives much more of an accurate population count than when I'm planting small seeds. I planted at 560,000 seeds per acre. This gave us 168lbs per acre. I plant a little higher with no-till. They were using the peat base innoculant. I hate the clay based stuff. Our local co-op insists on stocking the white clay based stuff. I have not found anyone who likes it. I refuse to run it through my drill. It attracts moisture and gums up in the seed flutes, the tubes, the bottoms of the cups in the main box, gums up the sensors on the population sensors, and generally makes me angry...
I suspect that the innoculant is not as important as the soil pH. Much of this ground has a low pH due to the high rates of fertilizer used in grass seed production. The folks I am planting for have not been baling off there straw on a regular basis and have found they didn't need to add as much P and K. They did say their pH was not the best but I didn't press for details. That would be the pot calling the kettle black. Since lime is somewhere above $55 per ton applied, it is pretty hard to come up with the extra money to put it on. You just about have to treat it as an equipment purchase and pay it off over several years. Especially if you need four tons of it!
I am trying to plant shallow, but the fields are very soft. I have the drill openers set a couple notches deeper in the wheel tracks. There is enough loose dirt and straw on the surface to pretty much cover the seed even if it is to shallow, but I hate to see seed on top of the ground.
Today I am going to switch over to wheat. I have to go ten miles or so to plant. I've been having problems with my fertilizer pump. I put a different pump on and have been having problems and so I have to work on that. The tractor won't lift the drill unless I slow down to 2 mph before I lift it. This is because the auto rate controller is directing too much hydraulic flow to the pump at higher speed.  I think the fertilizer pump motor is going out and taking too much flow to run it, but it could be my tractor. I'm going to put the old pump back on today. My brother rebuilt it for me.
Of course all my stuff is scrounged surplus stuff.
Tank and pump $250 from a neighbor. Blumhardt spray boom, free NOS from Uncle H., Calc an acre spraymate II, $750 off of ebay, hydraulic rate controller, $150 ebay... That sort of stuff. As a result, I have to also scrounge for repairs as everything is pretty much last year's model!
Posted by buddeshepherd at 11:43 AM