Dad turns 91 and I use violence to solve a problem!

We have been working to get ready for the big agricultural show in Portland. Dad has been making his usual efforts with the photocopier and tends to obsess a bit about certain missing items.
We sell moisture testers for hay, grain, soil, compost, and what ever... This is Dad in last year's booth. 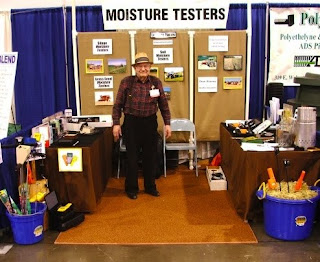 We were having our coffee break when there came a crash from Dad's office. I jumped up right away as I had been trying to wirelessly print through Dad's computer and I figured that the printer has upset a precariously placed notebook.
The problem was a bit more serious. It seems that there was a icecream container attached to the ceiling to contain the various drip during heavy rains. After a number of wet months the bucket filled and was forgotten. During coffee time the screw eye had pulled out of the ceiling and the bucket dropped right down on the middle of the printer. Water was every where. We had to rescue two laptops and dry out the desk. The laptops we pulled the batteries and vacuumed them out very well.
I then took the opportunity to hook directly to the printer but the print head had been badly knocked out of alignment and there were lines in the printouts. I used the printer software to try and adjust the print head but to no avail.
I finally gave up and went home.
Today we had Dad's 91st birthday party at my brother's house across the machinery lot. His two brothers were there and my other brother and his son and his father-in-law were there. They were searching for 1941 Chevy pickup parts to build a truck for the son. We have a couple of those.
Sadie had a very bad cough and so her and Laura stayed home.
There were some interesting discussions. I missed part of the one, it was how Grandpa and Grandma got together. They also told the story of their pet goat and how they got it up on the roof of the grainery and then pushed it off. They were quite worried they had killed it but it was ok.
They talked about going to church in Independence. They parked the car at Uncle Jack Greens house and stored the seats in the barn rafters. It was some sort of touring car. Maxwell or something. When there was rain or snow there would be a farmer with a team of horses by the bridge on the Luckimute (sp?) river to pull the cars up the hill. Once they came upon an accident and Grandpa and Uncle Jack had to carry the lady up the hill. Dad said she was unconscious. There first electricity came from a delco light plant. Before that they used "Flamo" gas lights. You mixed something with water to get light, said uncle Ted.
After the birthday party dad was worried about his iBook which I forgot to restart after the bucket incident. My brother's Pismo was fine. So I went out and put the battery in it and pushed the power button. It came to life right away. I hooked it to the printer and it started printing. My document had spooled on Dad's computer's desktop printer. (I love macs. They just seem to work on their own most of the time)
I was going to try adjusting the printer through software but I remembered how long it took me to admit failure the day before. I also had to go to the bathroom really bad as I drank a lot of coffee. I thought to myself. You know it got out of alignment by having a bucket of water dropped on it. It is already broken so what more can I do to it.
So... I turned the printer upside down and hit it as hard as I could with my hand. Then I turned it back over and tried printing.
Perfect text alignment!
Who ever said violence never solves anything!
Posted by buddeshepherd at 10:16 PM