It has been a while...
I've composed several blogs in my head but have not actually posted them.
Since the "Pandemic Lite" started, life has certainly changed.
I am still working at the college.
I am an essential worker.
We divided into three teams which work three days a week.
The other two days I "work for home." I actually do work from home. I rebuilt the new sprayer my college bought me. I took sexual boundary and harassment training. I though briefly about lawn mowing.
The rest of the time I spent catching up on things which I have neglected for the past four years I've been working off the farm. 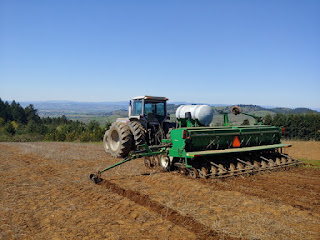 No-Tilling oats at the top of the hill

I've also been pushing hemp tonic. My hemp tonic is made from left over leaves and buds soaked in Everclear. I soak them for three weeks and then strain out the solids and put the alcohol mixture in a spray bottle. Hispanic people buy it. Apparently people in Mexico do this with the actual weed.
I have repeat customers so I guess it works. I use it for hand sanitizer. I tried a couple sips as people do take CDB internally for things like Parkinson's disease but it really tastes bad. Not something you really want to ruin a full cup of coffee with.
The whole Wu-Flu debacle has been pretty depressing. What is really sad and depressing is what will follow. If say ten percent of the population had died then world wide quarantine measures would be heroic. However, the Wu-Flu seems to mostly his rest homes and places where people are really squashed together (NYC) or have been sharing a lot of bodily fluids (spring break).
We are at the point where people who have small businesses are going to lose everything. When faced with the choice of going broke at age 55 and losing your house and all your life savings or getting really sick but probably not dying people are going to not choose losing everything.
So we have a conflict between those who have really good unemployment, an essential job (like me), or compromised immune systems, versus those people who are going to lose their homes or in other countries, people who will starve.
Politicians and Governor's can't deal with this choice because they can't understand the choice. The concept of losing your life's dream has never occurred to them. They don't think that way. If they did there would be a lot fewer sexual harassment accusations towards people in power.
I think we are going to have to go back to work. And I think there will be a spike in Wu-Flu cases as different groups start interacting and different levels of immunity come into contact again. (because that is how it works with cows...) Then the idiots that run the world will do exactly the wrong thing. Not sure what the wrong thing will be but they will do it. It will divide along party lines for sure but there will be legislation that will remove our personal freedoms and make us more vulnerable to pandemics.
That is my opinion.
This photo sums it up. Sports fields are closed at my college. The tiny golf green and the hammer throw are behind this fence. It is the only sports field with no gate. Someone put up caution tape. There are only a few people wandering campus during the day. Sometimes people go around the caution tape and sit on the bench by the hammer throw.
The only people this tape keeps out are the one guy who works for Utilities that likes to hit golf balls on break and people on lawn mowers. I do not tell people to leave because I don't care. Unless they are damaging the lawn. 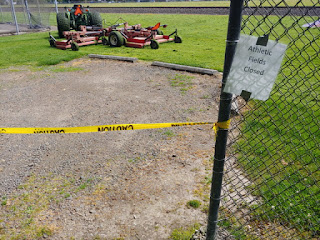 Keeping America safe by restricting all open spaces
In other news...
I have been thinking about my lack of blogging.
I have an hour lunch and I'm bored to tears for 30 minutes so I could blog or write the Daily Strumpet.
Here is a shotgun list of all the issues:
When I get home I tend to work.
I don't think I'm funny anymore.
Mechanical problems:
Back in the day, I had a PowerBook 180, a giant monitor, and a GCC BLP II laser printer. I used a real camera and sometimes developed my own pictures. In someways it was easier to print the Daily Strumpet than it was to do a Blog. Or more fun.. 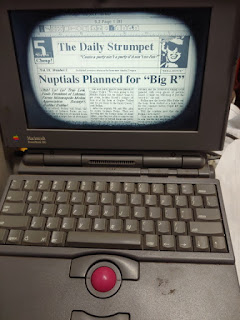 Tunnel Vision on the PB180

Currently, I have a MacBook Pro 2010 which locks up unexpectedly with large programs and won't shut down properly so the battery is always dead. I take photos with a non-iPhone and send them to Google Photos. Then I have to download them to my glitchy MacBook. The Blogger App does not work on my phone.
When I was blogging every day, my MacBook Pro worked. I used an iPhone or a digital camera and you could just hook up a cord to the computer and import the photos into a named folder created by Graphic Converter. I don't think things work as well as they used to work.
I'm looking at a 2017 MacBook Pro with 8gb ram, 256 gig HD, 13" screen, and the Adobe Creative suite installed for $750, might have another six months of AppleCare. I really don't want to spend the money but the battery life is amazing. My daughter bought one for college and she loves it. HD failed and AppleCare replaced it with 500gb flash drive and the guy she bought it from offered to replace the software.
I don't know. I've go so much work to do and not that much enthusiasm.
Posted by buddeshepherd at 10:32 AM 4 comments: