It sort of feels like spring and I have a link to a wild kitty attack in the big city!

Here is a photo to make you think of spring. 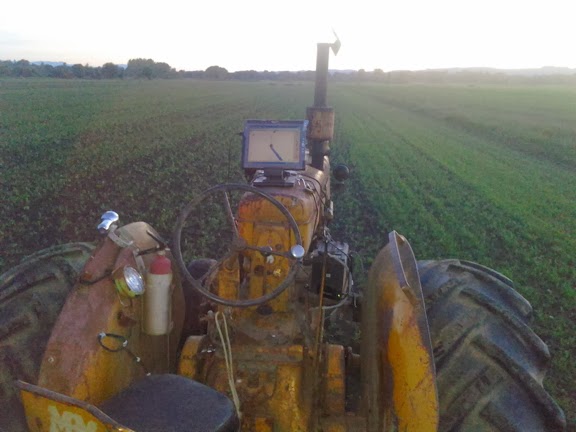 It has autosteer as well but it is random autosteer for stream of consciousness farming. Otherwise known as loose kingpins.

Update: at 8 a.m.
I was looking for instructions on how to take the clothes dryer apart and got distracted by my newsfeed.
You have to read these links about a cat attacking a hipster family in Portland.
Cat subdued by police,   and listen to the 911 tape. They called 911. Pretty funny.
I'm assuming hipster because they live in one of those bunker condos they built on the old train yards.
Although, it says in the article that the cat attacked after being kicked in the rear by the male partner.
I'm assuming that a hipster male would have first tried irony and/or sarcasm on the cat. Perhaps thrown a scratchy Burl Ives record he recently picked up at GoodWill, or tickled him with his beard.
So it could be a scrawny tweaker guy with his fat girl friend. Kickin' tha can in the arse would really appeal to the scrawny tweaker set and then calling da police. But, it would have been the fat girl friend that called the police so I'm going back to the scrawny hipster dude.
Plus the cat's name was Lux. Sounds like a hipster kitty name.
Probably the GMO corn in the kitty food that made Mr. Kitty go mad...
You have to click on this link to the Daily Mail. It is pretty funny. The Daily Mail has the best news and it has pictures.  Look at the photos, these people have sex and that results in babies and thus the cycle of de-evolution continues.
Which brings me to another thought.
I think the term "dumb-ass" needs to be used more. It has kind of a bad reputation as being rude and off color but it is so descriptive. You try to describe people with terms like "hipster, tweeker, tattooed freak, democrat, wife's ex-boss" and really just saying "dumb-ass" just really covers all of those terms.

Another Update: I may be a little harsh with the couple. What do you do with a crazy 22lb cat in an apartment? Out here in nature-land,  I'd just grab Mr. 12 gauge and open a door. I would not be all that worried about the cat scratching me because I don't wear shorts and I have no nose ring for Mr. Kitty to grab with his razor sharp fangs, and he couldn't claw my ears as I don't have 50lb spacers in my ears so they don't droop past my sagging shorts. (I have pretty much scratched by arse away so my pants do sag but that is a whole other issue.)
The guy did "kick him in the ass," and what more is there, "I mean dude! I kicked his ass! Oh yeah!"
Kind of funny, a couple blocks over they would have just eaten the kitty... Or got him in a fight with a chicken and placed bets...
Um...that sounded kind of bad didn't it? It wasn't mean to be racist, some of my best friends have chickens and they will eat anything! (the chickens will eat anything)
I know how to get rid of Mr. Kitty! Put GMO Soy in it's food, it if lives in Portland then it has a soy allergy!
I really need to go to work.

Posted by buddeshepherd at 7:29 AM