I suspect that the days of building roads and farms along the river bank are nearing an end. I've tried to interest her in fishing, but since I never catch any fish, she has not taken up that interest. 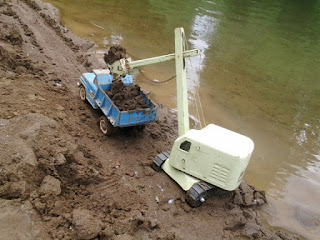 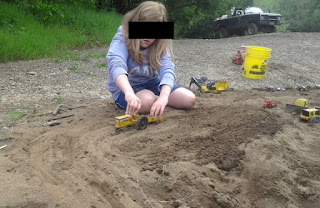 Later, a kid who looked like Carrot Top showed up asking if I had seen his dad. I thought at first he was being ironic as I had already discovered his Bob Marley decorated "altoid" tin.
He was down to the seeds and stems. I mean that literately.
I asked him, who's your daddy?  "Who is your father?"
And before he answered, I realized that his daddy was the weird stoner guy whose family used to own the farm next door.
So here it is... I'm playing trucks and building roads along the river, this kid is "doin' a bowl" with his dad.
What an interesting world we now live in...
Posted by buddeshepherd at 7:35 AM