No News is Good News?

I was looking for a news story last night and I once again found that the only source of real-time, eye witness news is social media and the internet.
What I was looking for was a story about the annual "Reach the Beach" bicycle marathon which blocks traffic every March in my general area. It is a benefit for lung cancer research but it would be more beneficial to local residents who have to work on Saturdays if it were for stress related heart attacks instead.
Generally, this race provides me with an opportunity to rant against bicycles riding eight abreast on country roads, but I missed my annual anti-bicycle rant as were working at home and I didn't get to see all the bicyclist on the highway.
(I also have had to eat some crow as my wife has taken up bicycling and goes as far as to take a group from her school riding in the San Juan Islands. I told her that even though local people waved they still hated her and she accused me of being a weird old curmudgeon.)
I had completely forgotten about the ride until a neighbor from Ballston stopped by to tell me the amazing story of bicycles hitting the railroad tracks and crashing into each other while emergency responders yelled at them to stop. Time after time after time after time. I asked him why he didn't put a cell phone video on youtube as it was quite entertaining. It is a perfect example of the bicycle mentality. There some sort of tunnel vision that takes over a bicyclist's mind, especially if they are in a group. It is the road in front and the glory of bicycling and not so much the large trucks behind them or the stop signs or the emergency responders frantically waving them to stop.
Even if there is already a pile of bicyclists in front of them, on the pavement, bleeding.
I have to wonder about the race organizers.
Last year the whole race blew through the stop signs in Amity and the po-lice started giving them tickets, and they just kept coming... They did complain afterwards.
The railroad tracks at Ballston have been there for a couple years now, but always come as a great surprise to the riders.
But the point of my Blog headline differers from the above story.
I was searching the News Register (local paper) for info about local evens surrounding the ride when I discovered the News Register has once again won awards.
This is a huge joke.
Newspaper people get together every year and pat each other on the back.
The thing is... There is no competition, no one knows they are incompetent.
Click here to look at the online edition of the News Register.
Doesn't it look like a real newspaper?
What you don't realize is that if you ever talk to someone interviewed by Paul Dalequarteapoopiebutt they will say, "well, I didn't really say that." Or you know he never actually came out to talk to me or see what happened, he did it all over the phone."  Or, "No, that is not what happened."
And if you exclaim in amazement, "But you didn't complain?!!!"
The response is, "Yeah, right, like who reads the News Register?"
And so it goes.
I suppose this carries on to the national level.
I see it on the local news. The TV news is terrible. All they do for national is report the top five news stories that show up on my internet startup page in Safari, and they only give out half the info.
Last night a bridge collapsed on Washington State. There was more relevant information on NewAgTalk has more info on the bridge collapse than the local stations. The locals still haven't figured out a truck hit the bridge, they are reporting it like it just collapsed. The most important/relevant information is hidden at the end of the story.
I watched the BBC on NPR this morning and the BBC had it figured out, but not KOIN or KGW or whoever sponsors OregonLive.com.
But they did have this headline how bike tourism will save towns devastated by the "loss" of timber jobs. CLICK HERE. Yeah, right...  Dumbasses with bicycles will bring in the money to replace $20+ per hour manufacturing jobs.
What a joke...
Have a nice day, I'm going to work.
I swear I could start my own newspaper and do a better job just not hiring morons as reporters, oh but wait... where would I find reporters who are not been though our fine college system and who are not morons? Perhaps I could import them from Mexico, like you have to do to get any actual work done...
The modern reporter certainly has not sailed around the world on a tramp steamer or come up through the ranks as a copy boy or ever had to do been able an honest day's worth of hard labor in their hard-scrabble middle class existence. 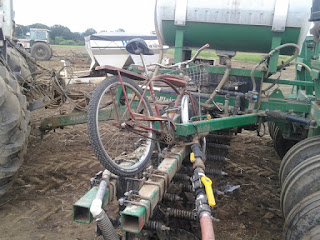 We told the kids this bicycle in the drill was a result of bicyclists blowing the stop sign at the end of the lane. I think they are immune to these misinformational declarations at this point in time. It is really that I just hate to walk...
Posted by buddeshepherd at 8:37 AM