We spent Tuesday through Thursday at the Northwest Agricultural Exposition. My dad was one of the first exhibitors there. Then skipped for 20 years, then came back in 1998 or so.
We sell hay moisture testers, and moisture testers for grain, soil, compost, baler stroke counters, dew alarms, and more stuff I can't remember. The show was terrible. No one has money, no one signed information cards. Dad was pretty depressed.
Sadie came for one day. That was the only day we were busy. She wore sweatpants that say "love" on  them. I did not realize this is considered slut wear. Several people pointed it out to me. I am pretty much out of touch with pop culture. I don't think she has a clue...
Here is a photo of her and Grandpa setting out to see the show. The show organizers had some scooters to let out. This is the first time in a while that Dad has got to make the tour. Later, he had Sadie drive. She sat on his lap. Several people commented that she was a better driver than her Grandfather. Did not get the details, just a lot of laughs. Who knows? 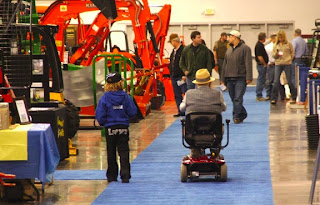 Note: If you look closely at the right hand side of the picture you can see a lady with a tan sweater and really tight jeans walking towards Dad and Sadie. She was also an exhibitor. She made a trip every half hour past our booth on her way to the bathroom. Perhaps she had a medical problem. She had a very determined walk. I did not ask her what was wrong. Possibly her jeans were so tight that she would loose feeling in her legs every 45 minutes if she did not release some pressure on the half hour?
Later we were home...
A package arrived!
I bought lego train tracks on ebay. The seller said they were broken and dirty. They were fine and best of all, not real spendy. We couldn't afford the actual train. Sadie is having a great time anyway. She is building her own trains.
I must now go to work. 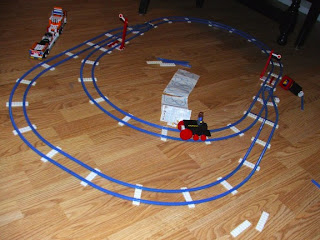 Posted by buddeshepherd at 8:48 AM